Spent the weekend skiing the Sellaronda. For those who don’t know, it’s a circuit around the Sella group which is a basically a confined group of large, non-skiable mountains in the Dolomites. Each corner of the Sella group is a different ski resort. The Sellaronda links all four resorts through a series of slopes and lifts/gondolas. It’s a beautiful area of the southern alps.

The weather was great but a little too warm since the bottom was pretty slushy. Anyways, we skied it both clockwise and counterclockwise this weekend (the orange and green routes). Over 40 miles worth of downhill (per my phone). Could be the last weekend of skiing unless I can convince my wife to hit Austria again in a couple weeks. Either way, the season started on 17 November. If it ends on 24 March, I can’t really complain. We skied in 5 countries in the last two seasons and I may have created a monster. My wife is already planning a trip to Chile in July 2020. 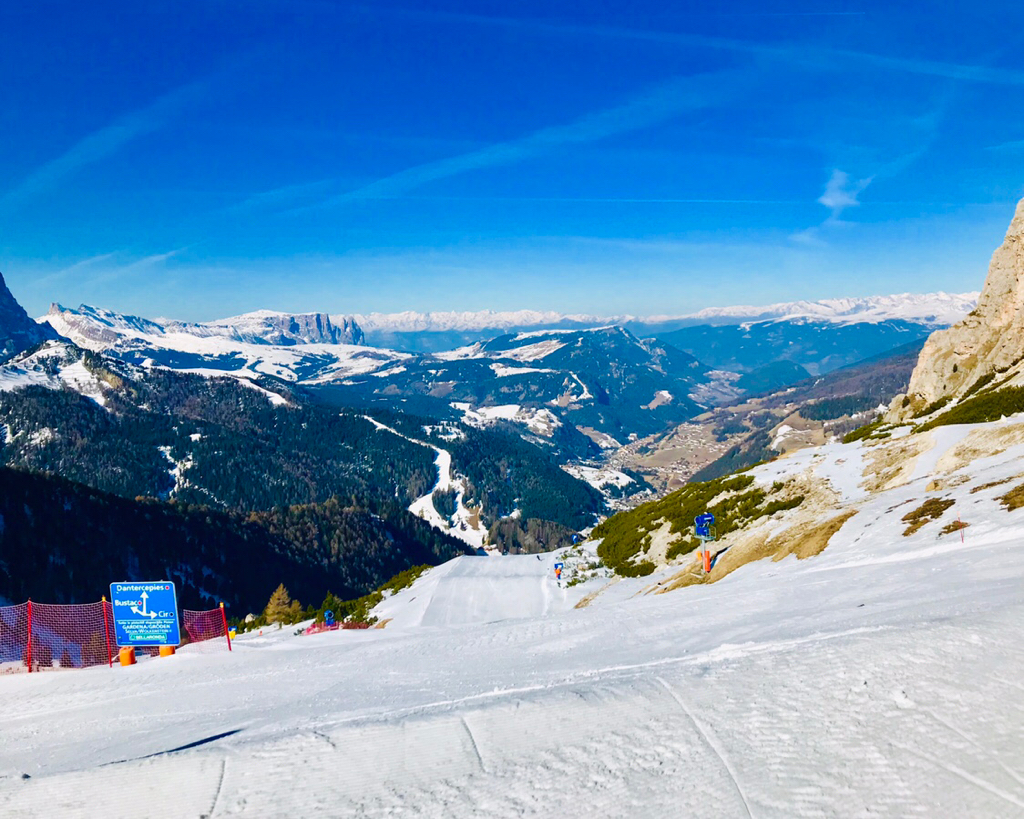 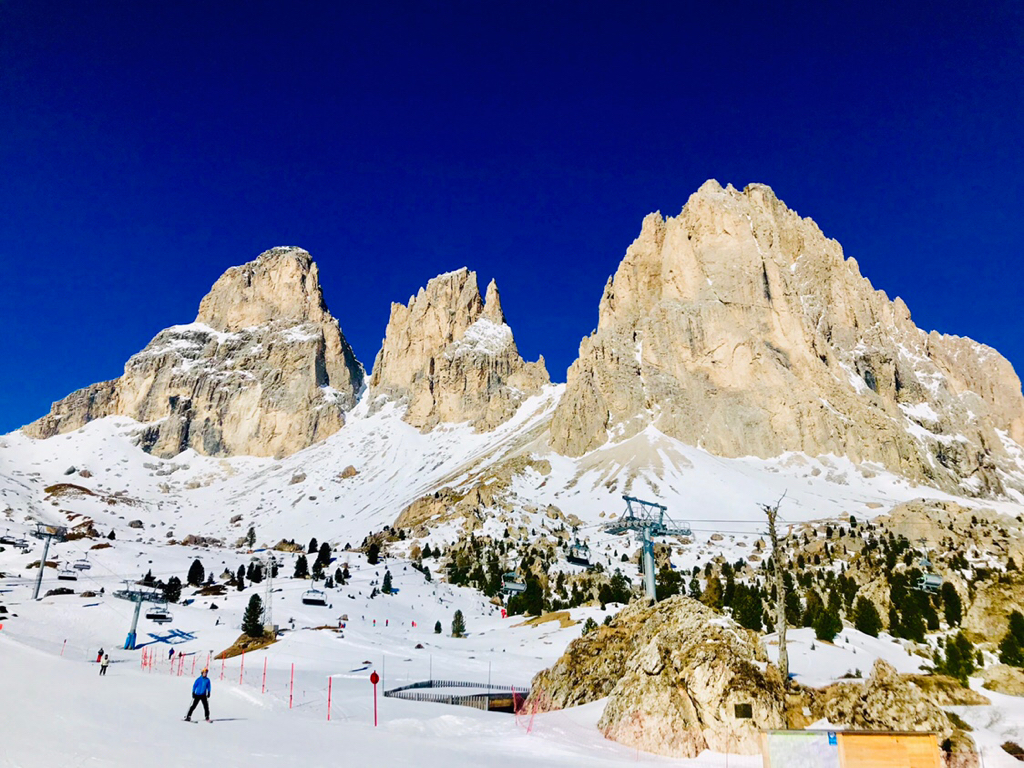 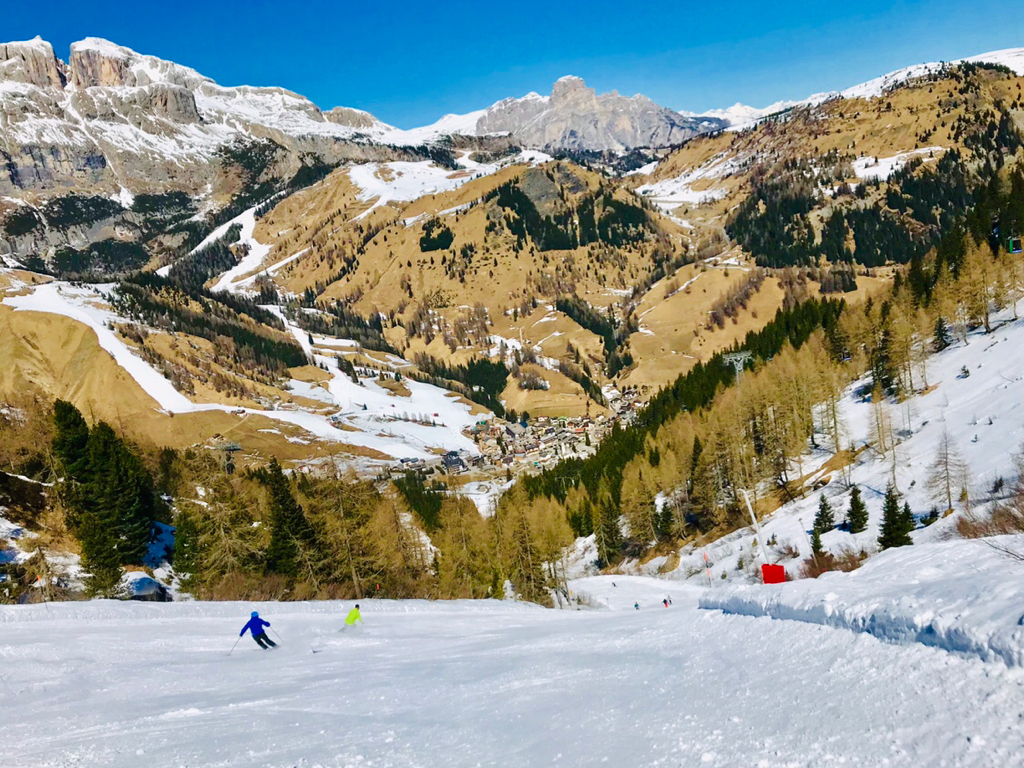 Anyone else still getting runs in? I thought I might be done for the season. Already started cleaning out beat up trail maps from various jackets, snow pants, and boot bags. But I was checking the weather for Stubai, Austria the next week. I know they still have some good powder up there and then I see this: 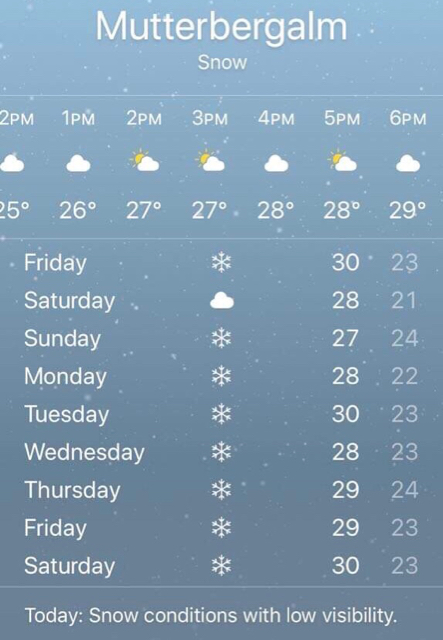 Maybe we try to get some more turns in before hanging them up.

Still lots of skiing in California with our huge winter.

Went up into the mountains above LA last weekend for some corn. It's melting out pretty fast, but got in some great turns 35 minutes from my house. 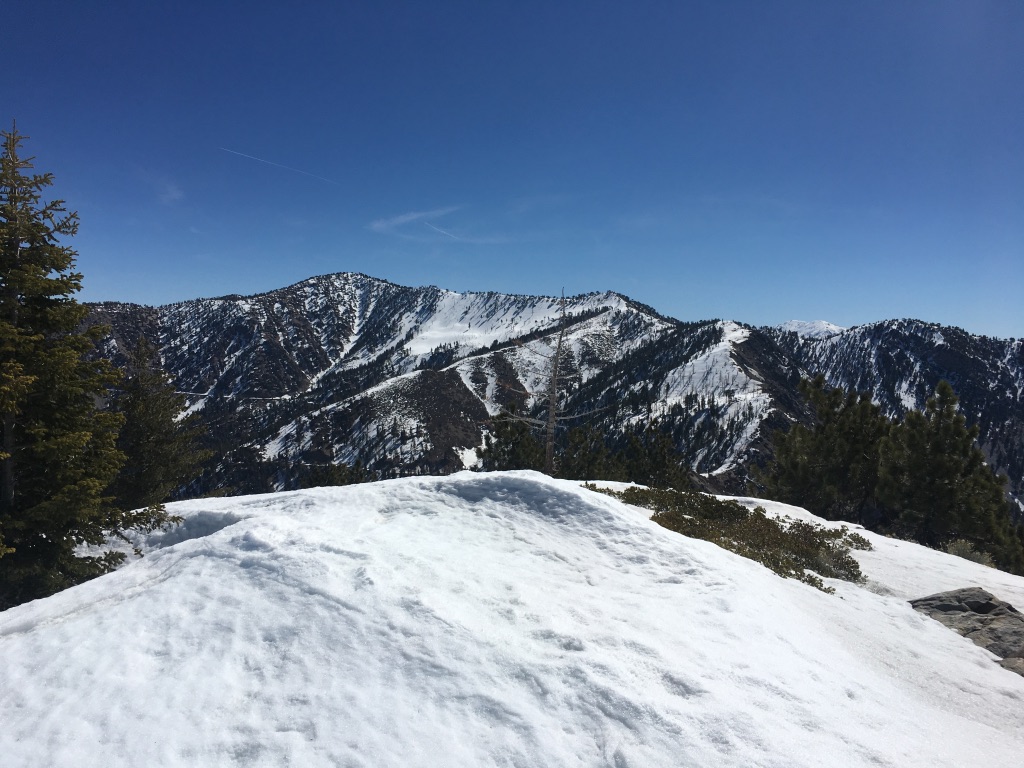 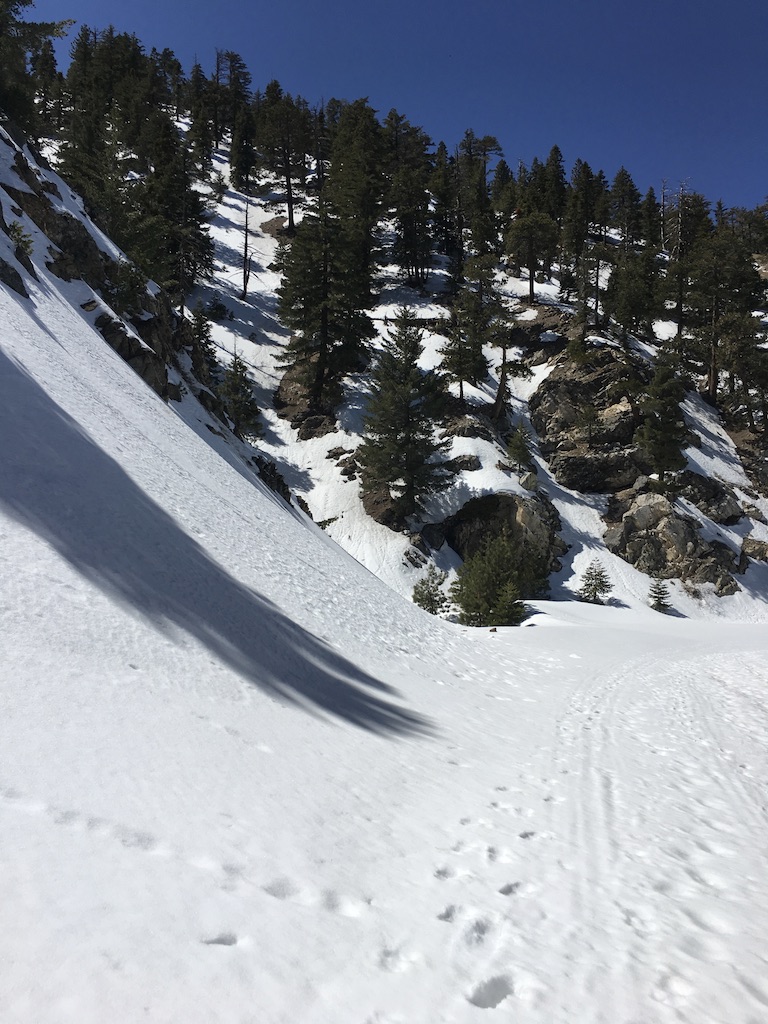 The Sierra backcountry really gets going at the end of April. That's when they plow the roads and you can start accessing the big peaks without massive amounts of hiking. Have a big tick list for this year.

Mammoth is getting a dump today. It's really good up there and will be open into July, so planning on plenty of trips up there over the next three months.

Here in Colorado we'll still have resorts open until the end of May and into June, plenty of good skiing to be had with all the snow we've gotten.

I HAD been enjoying it right up until I fell off a latter and injured my left foot. Now I probably have to hope for Arapahoe Basin to stay open late enough into June to get some runs in before the season is totally up.

FlexFlexerson said:
Here in Colorado we'll still have resorts open until the end of May and into June, plenty of good skiing to be had with all the snow we've gotten.

I HAD been enjoying it right up until I fell off a latter and injured my left foot. Now I probably have to hope for Arapahoe Basin to stay open late enough into June to get some runs in before the season is totally up.
Click to expand...

Heal up, and stay off ladders.

Skiing at Stubai was incredible. Great conditions on Saturday. Snow started Saturday night and continued heavy into Sunday. Sunday, I was hitting knee to thigh high areas of snow, on piste. My snowboarding buddy went off piste on Sunday and got buried in chest high snow. These are pictures from Saturday (not enough visibility for pics on Sunday) 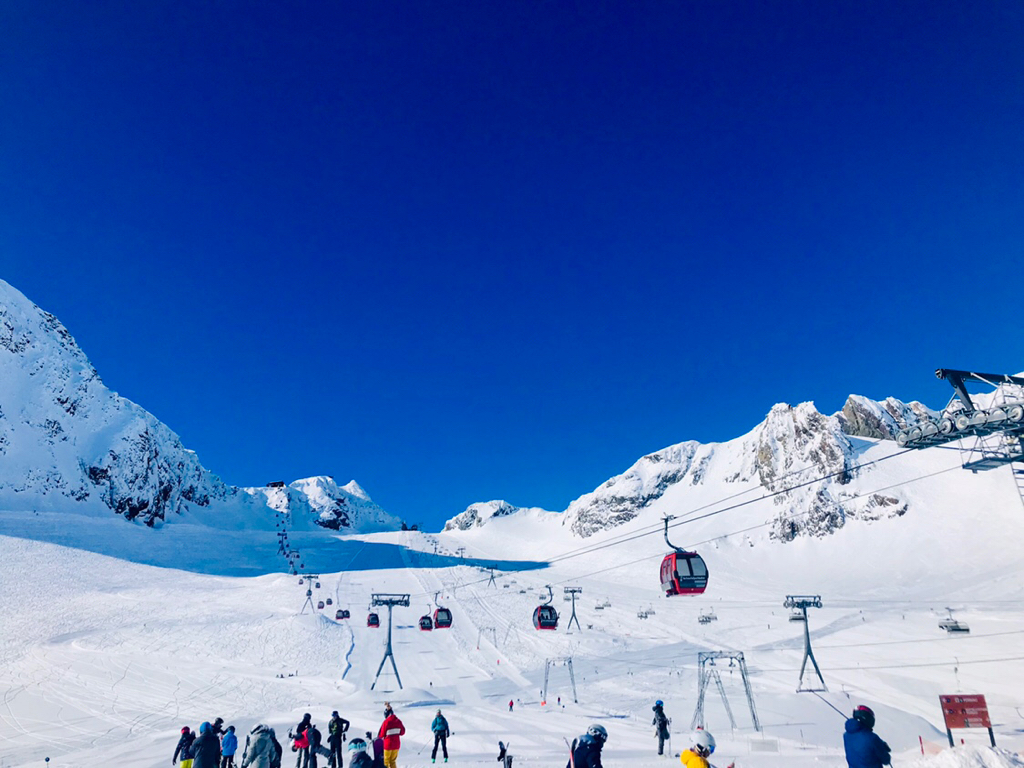 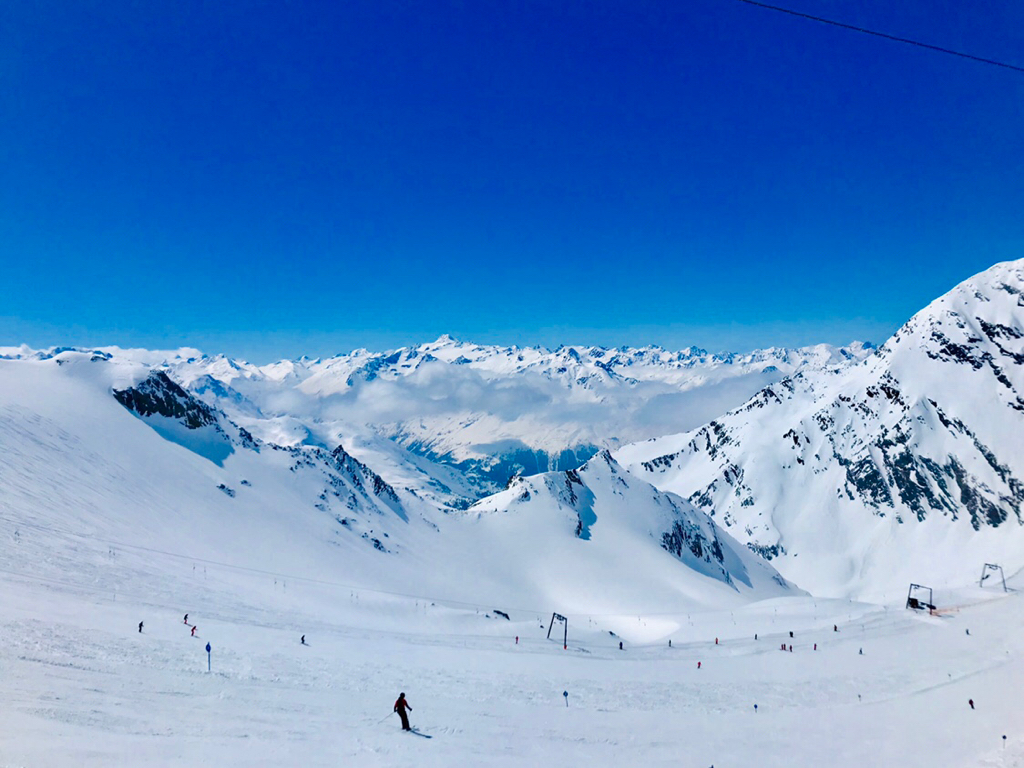 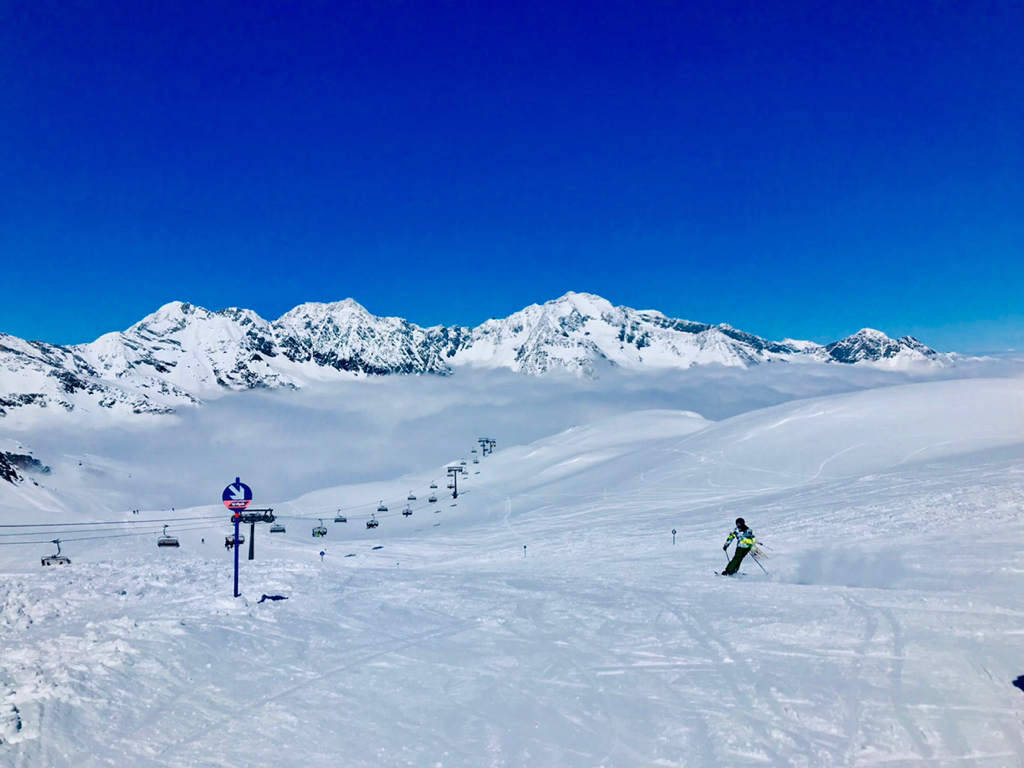 Just grabbed Independence Peak, which has been on my list for awhile. Good corn, easy ascent and great views.

The target. Skied right from the car. 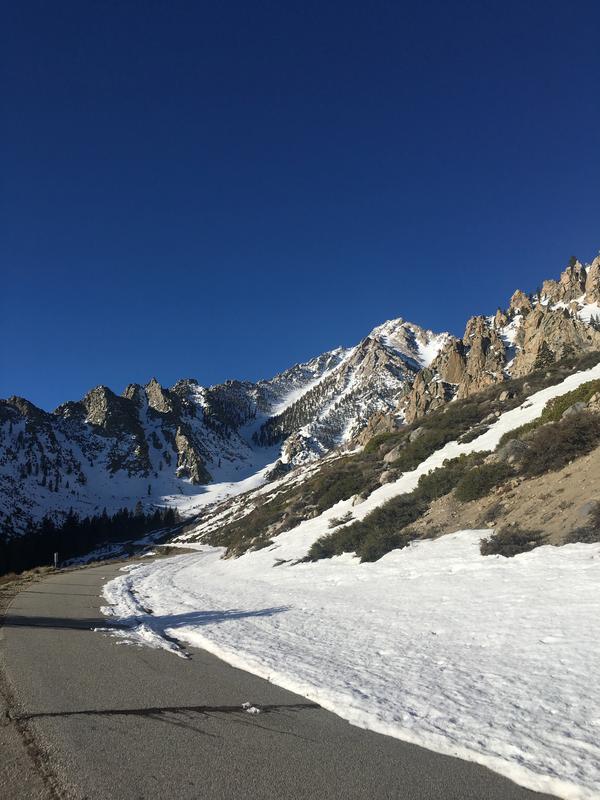 The way up. Ran into two other guys, which is really uncommon in this part of the Sierra. 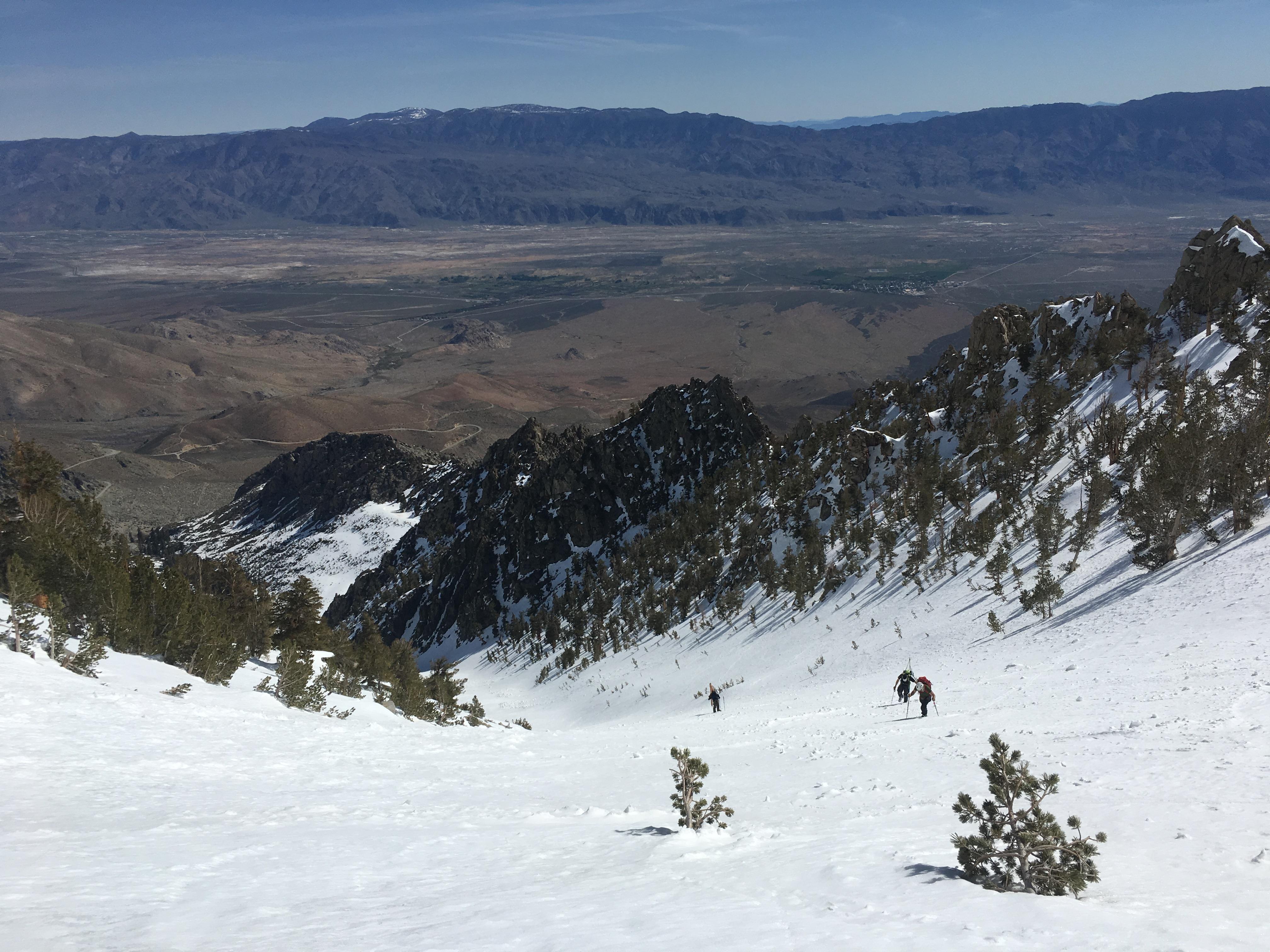 Top got a bit steeper: 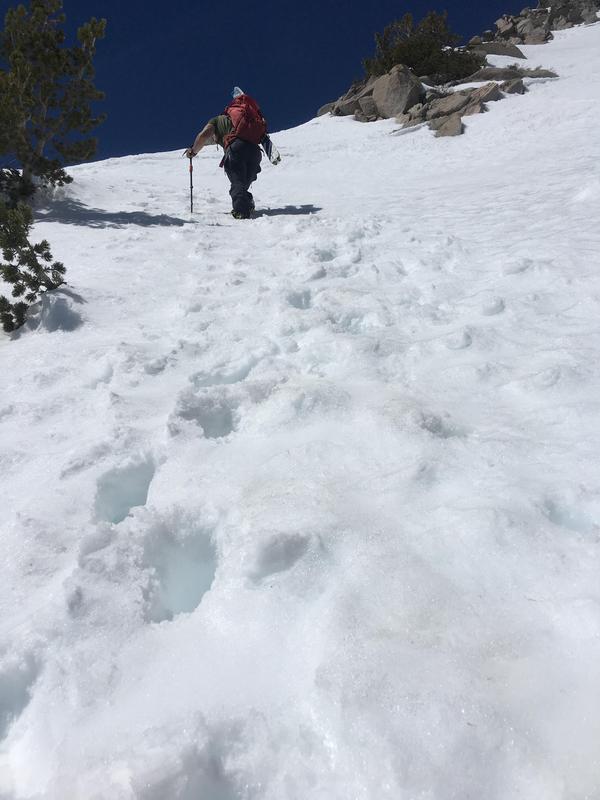 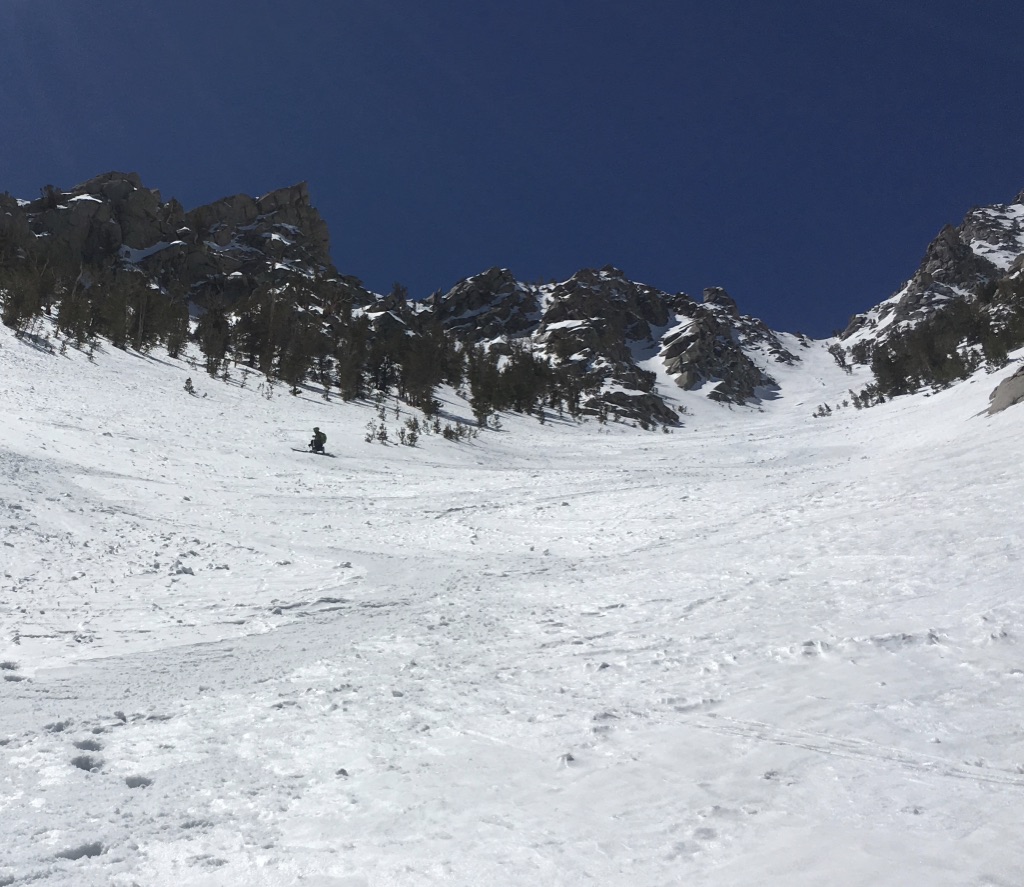 Back up the Sierras for some main course adventure. Went to Hurd out of South Lake on Wednesday, followed by the East face of Morrison on Thursday.


Blue was the route up, Red was the run down. Dotted orange was the way we were supposed to go. Oops. Got a little scary on that big traverse: 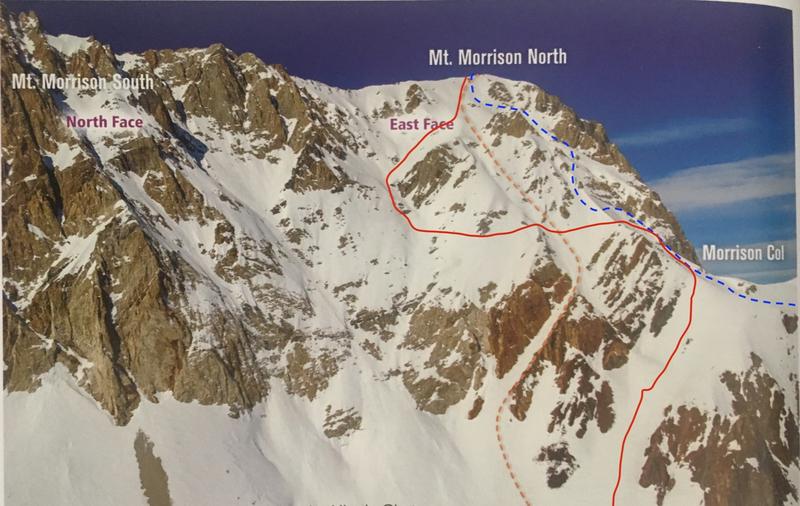 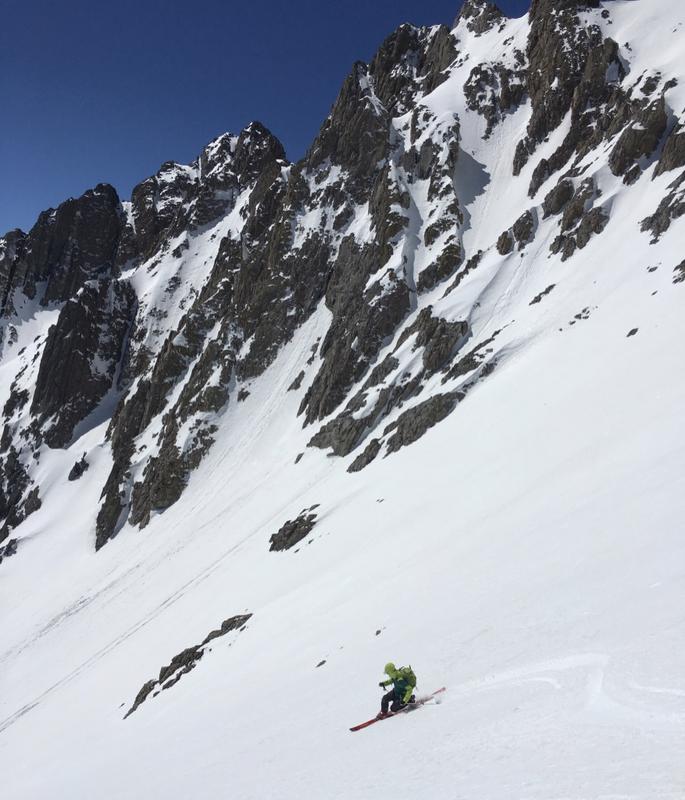 Glad you enjoy them!

Been trying to hit something big the last couple weeks--I was hoping to ski Whitney, but the weather has been rough with storms hitting every day or two.

We finally got a few days of sun, but were worried that north faces could slide, so decided to stick to east and south facing stuff.

We ended up going to Mount Alice/Buck Peak which overlook the Palisades, near Big Pine CA. The Palisade Glacier is the biggest in the Sierras and there are a bunch of 14ers in the area. Definitely want to get back there for an overnight and explore the bigger stuff, but it will probably have to wait until next year. 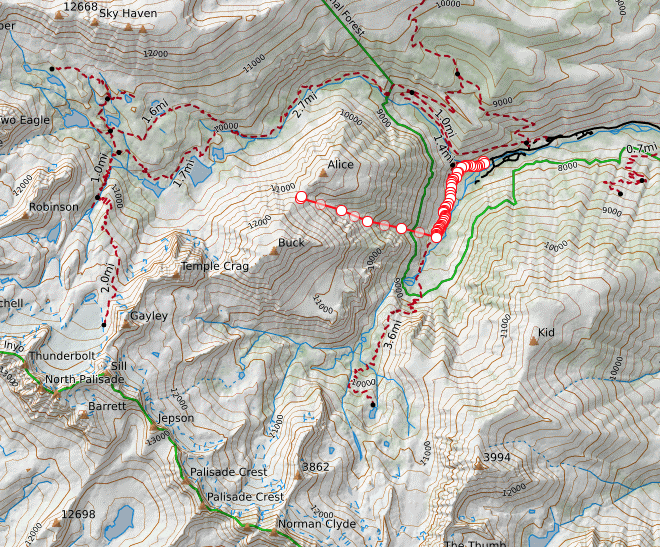 This is me skinning up the gully. The lower half was pretty steep, but the upper half was an easy skin. 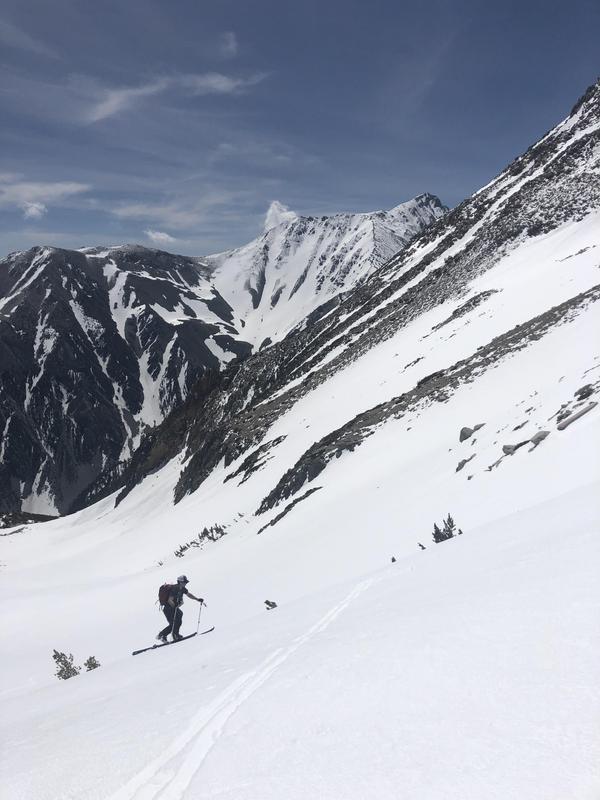 The corn was pretty good coming down. I don't think it got quite cold enough overnight so it was a bit sticky despite being totally pristine. 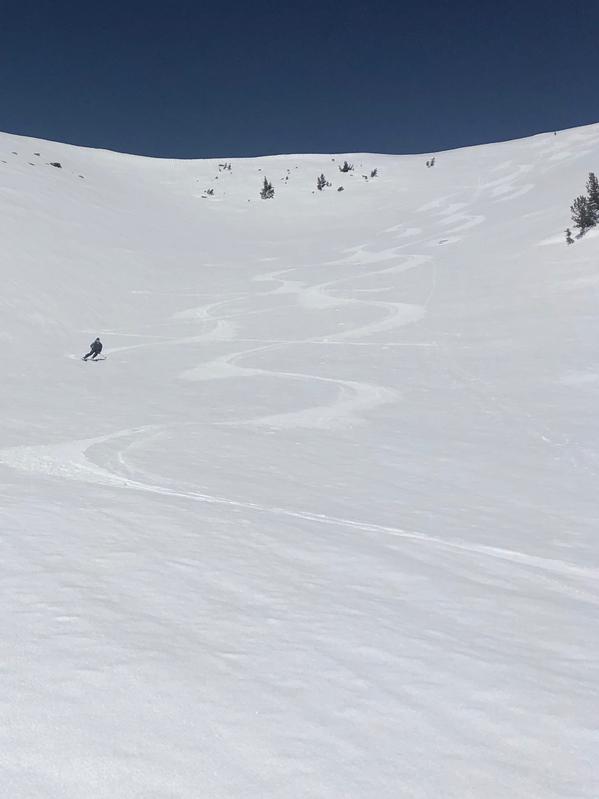 We've had a bizarrely cold and wet end to May, which has made L.A. green and Mammoth midwinter white.

I took the kids up for Memorial day weekend and had fresh tracks all over the place. 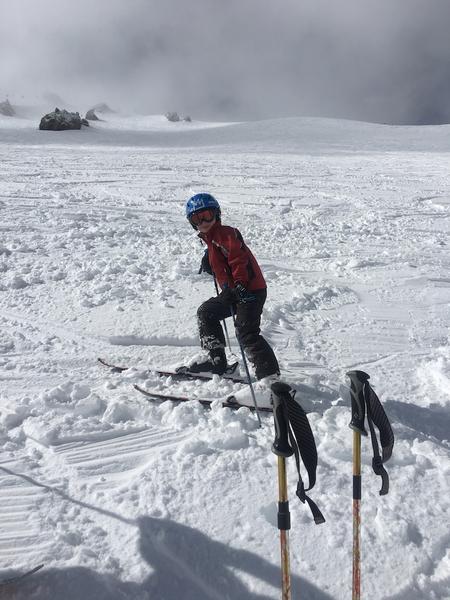 On Memorial Day, I hit up one of the all-time classics, Bloody Couloir. This is not my pic--there was actually much more coverage, with the recent storms even filling in the always-bare ridgeline. The mountain was socked in, but the powder was very deep and no one else had gotten to the top. Then, about a quarter of the way down, the clouds cleared and all was glorious. 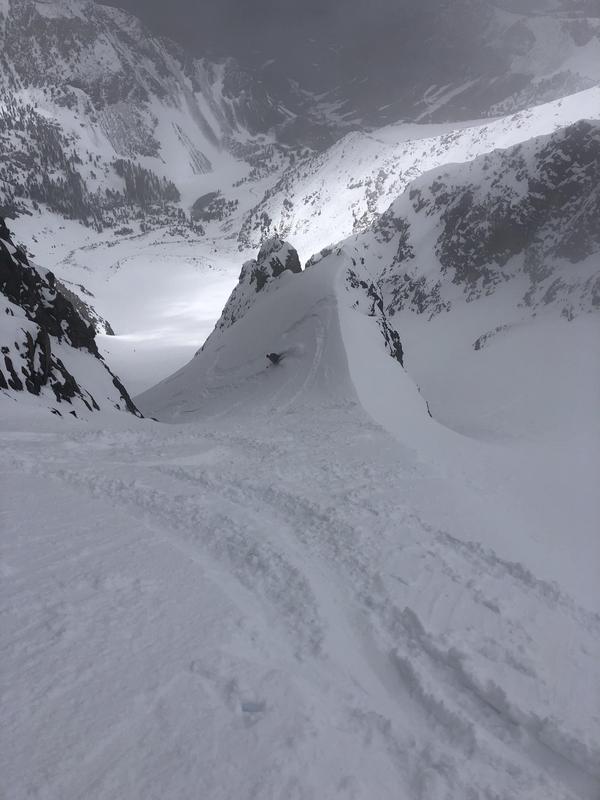 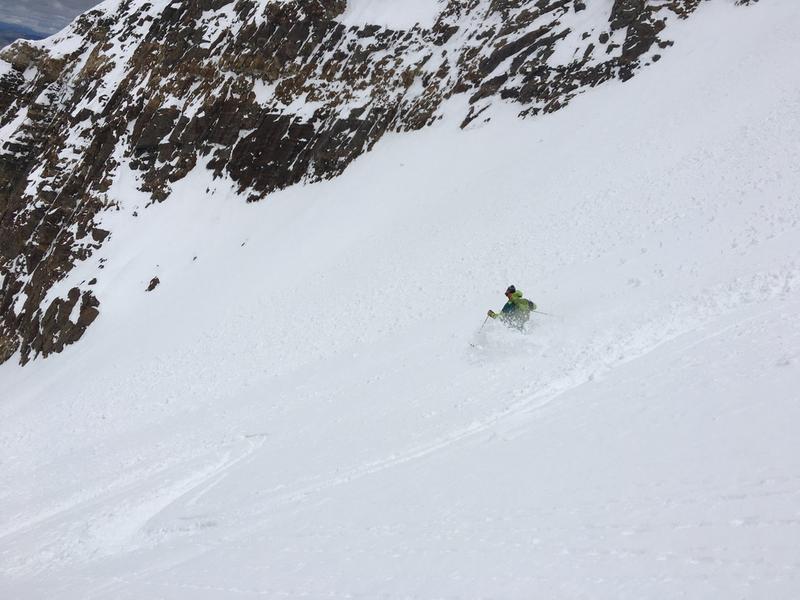 Now that the days are getting shorter, skiing is back on everyone's mind....

Okay, maybe it is full-on summer, but the Sierra season keeps going so I got to scare the shit out of myself at least one more time this year.

We headed up to North Peak, near Saddlebag lake on the eastern edge of Yosemite. Our target was the North Couloir, the rightmost of the 3 north facing slots through the rock. 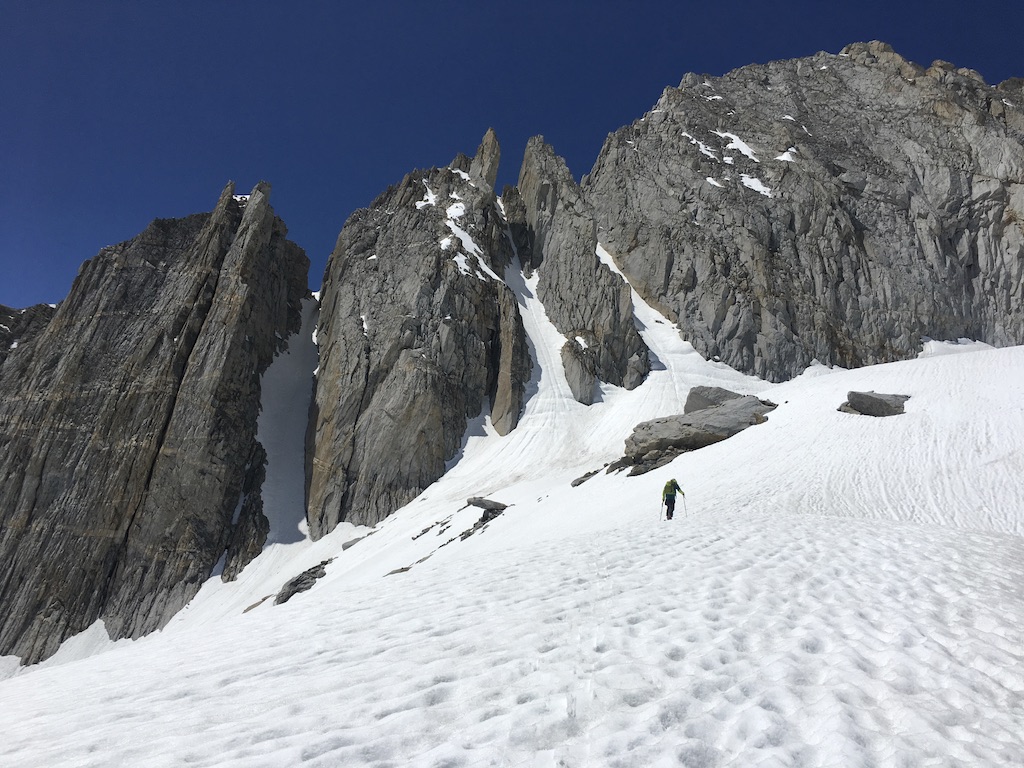 Even in the foreshortened view, it looks steep. In person, it is REALLY steep. I'm somewhat scared of heights and super-steep climbs, so my preference would be to go up the much mellower back (southeast) side to access the couloir. However, the big risk in the North Couloir is that it becomes a summer/fall ice climb, so late in the season the blue ice underneath can be exposed. We decided to climb it so if we hit blue ice we could at least turn around.

Once we started climbing I got really freaked out by the exposure. 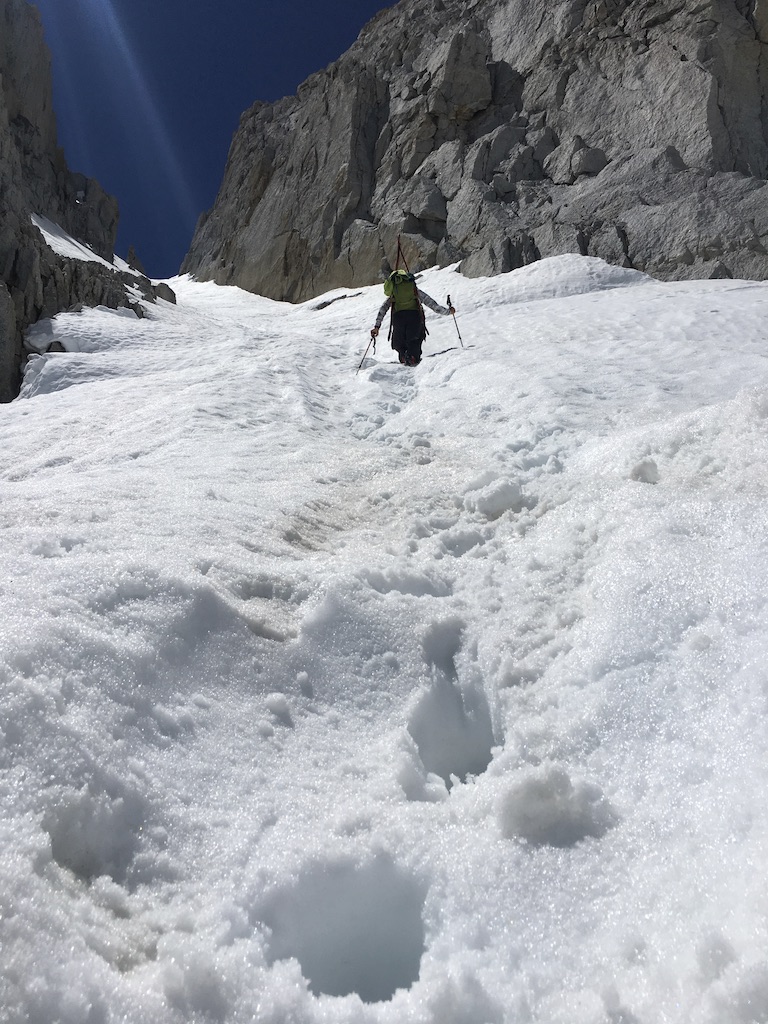 Not sure the photo does it justice, but it was EXTREMELY steep. The photo is from closer to the bottom, where the snow was softer. Higher up we hit much harder stuff, hard enough that I needed to swing my ice axe overhead to get a decent purchase. I was actually too scared to take any photos by that time. On top of that, I was imagining hitting blue ice, and wondering how the hell I could get my skis on on that kind of slope.

After an hour and a half climbing the couloir, we topped out. I was really beat from being that tense for so long, but ate some food on top and felt much better. Then we put on the skis and looked back down. 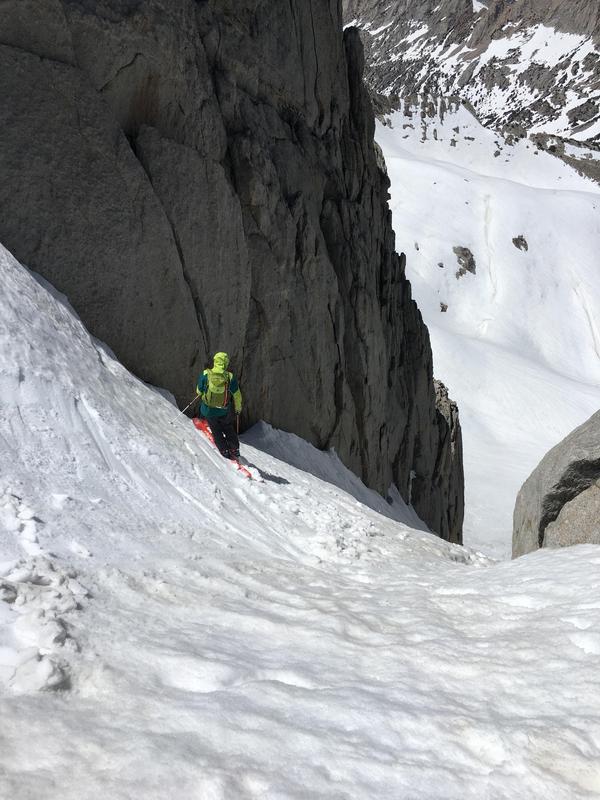 The turns going down were great. I'm a lot more comfortable on skis, and the snow was pretty perfect. We exited the couloir, got some more great turns on a hanging snowfield below, then slogged back across suncups to the car. Probably my last backcountry for the year, although Mammoth is still open so I'll probably grab some resort turns in July and August.