Milan Lucic is going to take a spin of the wheel for punching Kole Sherwood.

Between here and everywhere.

MiracleOfO2704 said:
Milan Lucic is going to take a spin of the wheel for punching Kole Sherwood.

in light of this, this thread is good reading.

Lucic and the art of aging gracefully

It was mentioned in the Krejci thread, so I figured I'd start a new one for this discussion Lucic I think will age horribly. Marchand probably too. Players like Bergeron, Krejci, etc less so. At the risk of getting off topic too far I agree completely, esp with Lucic. I'm not sure...

I nailed Lucic, Marchand....not as much

Credit to the CBJ announcing team - they had every right to go over the top like Edwards or Errey would if someone on their team got an unprompted assault carried out on them, but they kept it pretty measured.

Lucic must be seeing Neal lighting it up again and feel he has to do something every night to earn his current deal. Next best thing is to forfeit it with suspensions I guess

If any video deserves a nice yakety sax it’s that one.

Gotta give Markstrom credit, though. He hung in there.

Bruins open next season in Prague against Nashville.

Worked out well last time they did this.

I live an hour from Mannheim and five from Prague. 100% going to both games.

Leafs lose Marner for 4 weeks to an ankle injury. They also lost to Chicago 5-4 last night.

Interesting times in Leafland. They are a pedestrian 9-6-4, 6 ROW, 95 point pace. Not bad, not great, especially for a team with the kind of talent they have. The problem for them is there isn’t a ton they can do with the roster because they are capped out. Hutchinson has been a disaster as backup G but they don’t have a ton of options to replace him.

Leafs end up waiving Hutchinson today. They’ll role the dice with Kaskisuo as the backup in the short term.

Kings are apparently done with Kovalchuk. Kinda weird tweet from Friedman, not sure what the deal is. Doesn’t sound disciplinary since they say he is free to practice with them, doesn’t sound like a buyout or trade either. They are just parking him. $6.25 AAV through next year, full NMC.

Crosby out a minimum of 6 weeks after undergoing hernia surgery.

Tampa is up on the Rangers 8-1 after 2 periods. Holy shit.

cshea said:
Crosby out a minimum of 6 weeks after undergoing hernia surgery.
Click to expand...

I know we hate him around here, but this sucks for the sport.

I'd rather save the cap space for a bigger signing closer to the deadline based on need/injuries.

The cap space is pretty irrelevant for a guy making $775K. They can waive and demote and clear the hit entirely off the cap if/when they want to. They are also in LTIR already so they aren’t accruing space daily.

He hasn’t has a great year but he’s got a track record of scoring. I think it’s pretty low risk and would take a shot.

cshea said:
They are also in LTIR already so they aren’t accruing space daily.
Click to expand...

I was not aware of that specific factor. I retract my point. I thought saving up could get them a bigger contract at the deadline.

Devils are waiving Corey Schneider and sending him down to the AHL. Ouch.

Big ouch. 12m over 2 years left after this year as well.

The Man in the Box

Wow. I had no idea his play had fallen off so hard.

Yeah he's boasting a wonderful save percentage at even strength of 83.3% and a PK save percentage of 71.4% and GA%- of 160 yikes. Meanwhile the young'n Blackwood is at 89.4% and 81.8% and 104 (right about league average). Just not a great season for him and it's a pretty quick cliff even if the last few years have been down years, since the 16-17 season he's basically been a slightly below average goalie.

veritas said:
Bobby Ryan leaving the Sens and entering the player assistance program. Hopefully getting help for whatever it is he’s getting help for makes him a much better person.
Click to expand...

Is the player assistance program some sort of drug or mental health rehab?

Wow, I think it had to be done but didn’t expect them to pull the trigger.

cshea said:
Wow, I think it had to be done but didn’t expect them to pull the trigger.
Click to expand...

Not only did they fire him today, they made him fly to the West Coast with the team and fired him in Arizona.

It’s not new news, but people are remembering that new Leafs coach Sheldon Keefe was involved in that crazy Mike Danton / David Frost story, both as a victim and alleged perpetrator of sexual abuse while in juniors. If anyone doesn’t remember, Danton tried to hire a hit man to kill Frost, who by then was his NHL agent.

By all accounts, Frost was a borderline cult leader who physically and sexually abused his players.

The AHL’s Milwaukee Admirals are commemorating their 50th season with a logo that gets at the true meaning behind their nickname. ... It turns out the Admirals nickname derives from Admiral refrigerators, the signature item sold by local businessman and appliance store owner Erwin Merar Frank, who purchased the team in 1970.
Click to expand...

Bortuzzo has a DPS hearing for these cross checks on Arvidsson. I was told they were the least penalized team though?
View: https://twitter.com/bradytrett/status/1198455876002017280?s=21
C

Wow. Tell me he got at least two minors for that? One for the initial and one for the I’m already going to the box so I’m going to try to injure him second check.

The first one isn’t as bad as it looks, he really didn’t hit him that hard- Arvidsson should have been ready to get bumped if he’s hanging out in the crease. But the follow up cross check to the lower back of a defenseless player should garner a suspension for sure, it was dirty, intententional, and intended to injure. And wtf Binnington? What a dickbag.

Cotillion said:
Wow. Tell me he got at least two minors for that? One for the initial and one for the I’m already going to the box so I’m going to try to injure him second check.
Click to expand...

And no, gutless call by the ref to only give 2.

Holy moly, that is an awesome logo!

Arvidsson is out 4-6 weeks.

Great for the sport when a no talent shithead like Bortuzzo can knock out a really good player and get maybe 2-3 games for it if that.

Good...thank god it was more than the spitting (although that was pretty bad too).

Meantime, yet another reminder that Mike Babcock was a dickhead:


If you don’t want to deal with Twitter, a Toronto Sun article mentions an incident 3-4 years ago where Babcock forces a rookie to rank teammates by work ethic, then told the bottom ranked player in front of the rookie. Ian Tulloch of the Athletic says the rookie was Mitch Marner.

Babcock confirms the story, says he realized it was a bad idea and apologized to Mitch.


I think Babcock could be out of the NHL for a little while now. He’s hated by the vast majority of players who have played for him and he doesn’t have the recent postseason success to make guys suck it up and deal with it. 5 straight first round losses sandwhiched around a DNQ, and I personally think he was a big reason the Leafs couldn’t get past the Bruins. Hard ass coaches seem to be dwindling. Even Torts has toned it down.

I don’t see an obvious landing spot If he chooses to get back into coaching. Teams that could make a move are Detroit, New Jersey, Calgary, Nashville. Obvious connection to Detroit but would he want to sit through a rebuild? He did for 1 year in Toronto but they already had Marner and Nylander and were clearly tanking for Matthews. There was a shorter path to contention in Toronto than there currently is in Detroit. New Jersey is a blend of veterans and youth. They could probably win now if they could get an goalie who could stop a beach ball. They also have the Hall elephant in the room and Babcock could drive him away. Nashville is a veteran group, but going from Laviolette to Babcock doesn’t seem like changing much. Calgary is a mess right now but they are only in year 2 of Bill Peters. Not sure they’d can him just yet. Treliving inherited Hartley, fired him 2 years in, hired Gulutzan, fired him after 2 years. So maybe? Would ownership even let him fire another coach without handing him his pink slip as well?

The Flames and league are investigating the Aliu allegations.

TSN speaks to Aliu. Two of Aliu’s Rockford teammates independently corroborated the incident. The captain at the time approached Peters about the incident and Peters didn’t apologize. He had a meeting with Aliu where he repeated his previous racist slurs. Horrifying, Peters has to be gone for good. 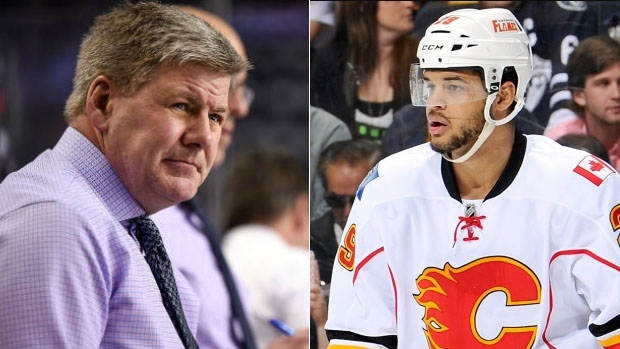 How is this remotely a tough call? In addition to being a racist sack of shit, Peters has them 11-12-4.

Treliving about to address the media, apparently they somehow haven’t made a decision yet.