1-0 guys! I'm so happy with how we looked tonight

Less observant than others

from the wilds of western ma

What's that garage rock nugget from the 60's, something about water??

Don't know him from Adam

I missed that dirty water.

it's not, but many will unconsciously do it I'm sure.

Now let's keep the O in the O's win total for the weekend!

You are correct, sir.

CaptainLaddie said:
You are correct, sir.
Click to expand...

Not sure we can pitch either... until we get to Nathan's next start.

SemperFidelisSox said:
Tied for 1st place on July 24 is good.
Click to expand...

My personal theory is that this is due to JBJ avoiding his annual spring slump.

boxosII said:
if they put cardboard cut-outs in the stands at Dodger Stadium, do they remove them after the 7th inning?
Click to expand...

Let’s savor this at least for one day.

Last night was fun. The piped in fan noise didn't bother me a bit. In fact the I would say that for the most part if we didn't know it was piped in, we wouldn't know it was piped in. Yes the fan cut outs looked strange, more so because of the fact that so many were close up shots of the fans which kind of magnified the oddity of it. But in the end it just became background. We saw our first extra inning game under the new rules and while I'm not a huge fan, it wasn't horrible. Perhaps the fact that it ended with a walk off grand slam helped ease my discomfort with the new rule. National League DH...IMO it's long overdue as interleague play has pushed the game in that direction and most pitchers don't really seem to give a shit about hitting any more. I'm happy to see baseball back. I'm looking forward to seeing how Chaim's early moves pan out. I want to see Eovaldi come through the season healthy. I want to see younger players have some sort of opportunity and I don't want to wait until next year to see these things. I want to see enough of this season played so we have an idea of next season's needs. Once we understood the logistics it was going to take to present any sort of 2020 season we should have been well aware that the season was going to be anything put typical. Am I going to be thrilled by everything I see? Nope. Will I bitch about everything that doesn't thrill me? I hope not because we truly have no idea how long this may last. Welcome back baseball and GO SOX!!!

Did we find out why Eovaldi changed uni numbers?

Lose Remerswaal said:
Did we find out why Eovaldi changed uni numbers?
Click to expand...

Haven't heard anything more from last night. Remy speculated (admitting that it was a long shot) that perhaps Vazquez's locker is next to Eovaldi's and he mistakenly went to Vazquez's locker to change. I'm thinking it might have been something as simple one of the clubhouse guys hanging on of CV's jerseys in Eovaldi's locker and it went unnoticed. Not a stretch given the similarity in numbers and the fact that there are no names on the back.
S

Lose Remerswaal said:
Did we find out why Eovaldi changed uni numbers?
Click to expand...

Eovaldi didn’t realize Vazquez also had a spare jersey hanging in the batting cage with his. 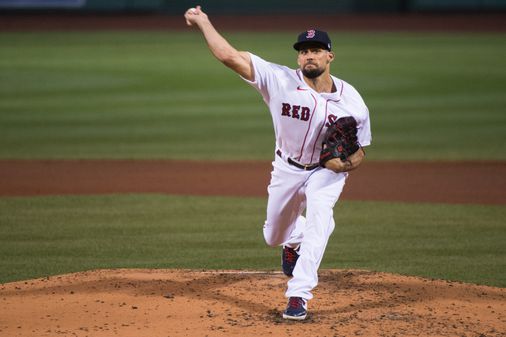