fave time of year to ski--less likely to freeze ass off, snow still good. Where was the NNE jackpot from this last storm?  I know North Conway did well, of all places...
A

Somehow managed not to post here all season but it's been a good one - and no, I don't think it's over yet even though it's all been New England for me. Been out close to 30 times, from skinning on local hills after the blizzard to a total of five times (thus far) on Mount Washington, most recently yesterday (with my 12-yo son, making his first ascent).

Strange season in that it started kind of late, right after Christmas, but there were a couple great weeks with lots of snow then (for me including three days in prime conditions at Mad River Glen). We got not one but two January thaws in New England this year and by the end of the month MRG was closed and I was skiing smaller places that made and groomed a lot of machine-made snow - fun too but I'm all about powder and, increasingly, backcountry. In fact for Christmas I got signed up for an avalanche course, scheduled the first weekend in March at Mt Washington, and a month beforehand I had doubts there would be enough snow for it to come off. Then came blizzard to signal a welcome weather pattern change, and it's been largely great ever since.

A handful of highlight photos: 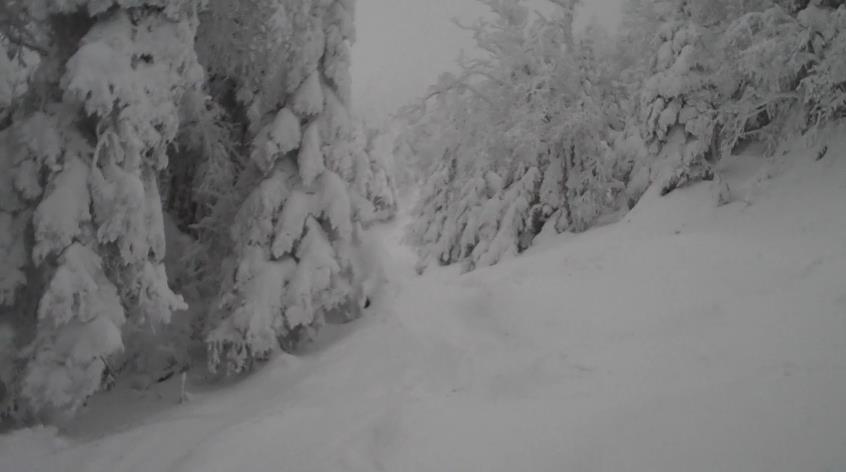 Local earned turns after the blizzard, 2/10 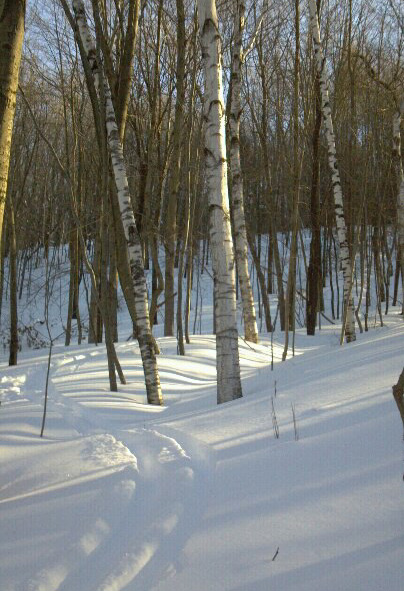 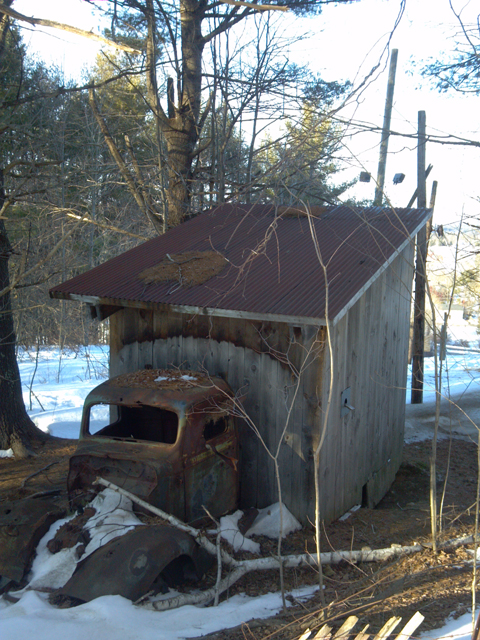 Deepest pow I skied this season was ~2' at Jay on 2/21-22. These were leftovers in the woods the second day: 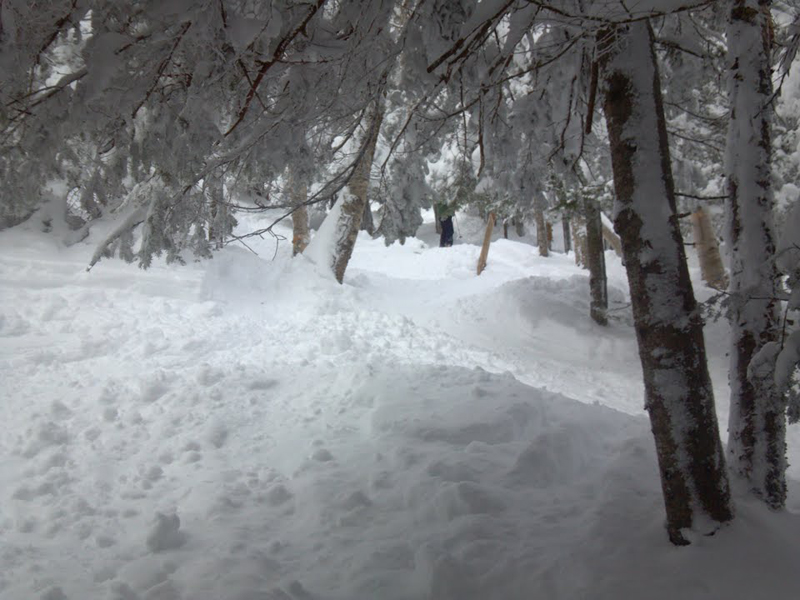 Local earned turns with my dog after an 8" snowfall 2/25: 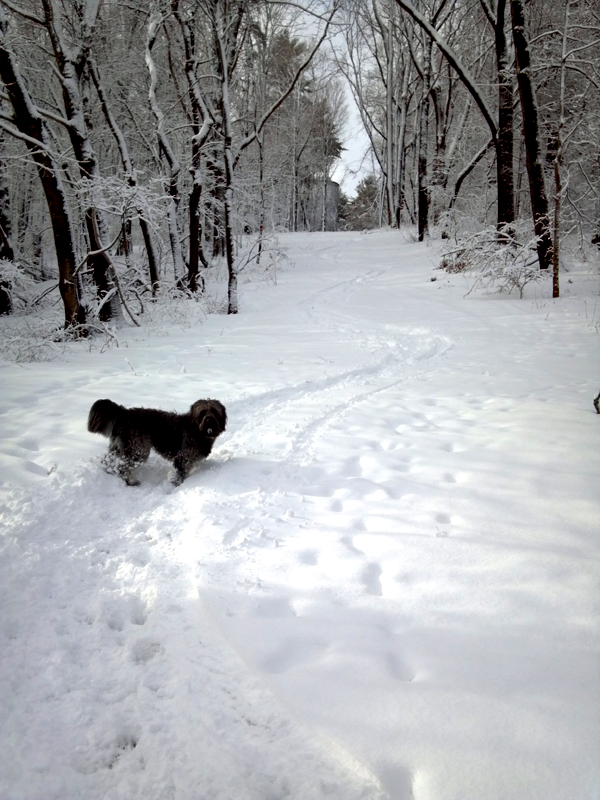 Gulf of Slides Trail, Mt Washington. 2/28 after > 1' of snow. I didn't go any higher than this because of avalanche danger, although others in an advanced avy course who skinned up past me did. (Despite appearances, this shot is looking uphill, with a gully/avy runout in the foreground. Also did something to the Droid so this came out black/white, though I like the effect.) 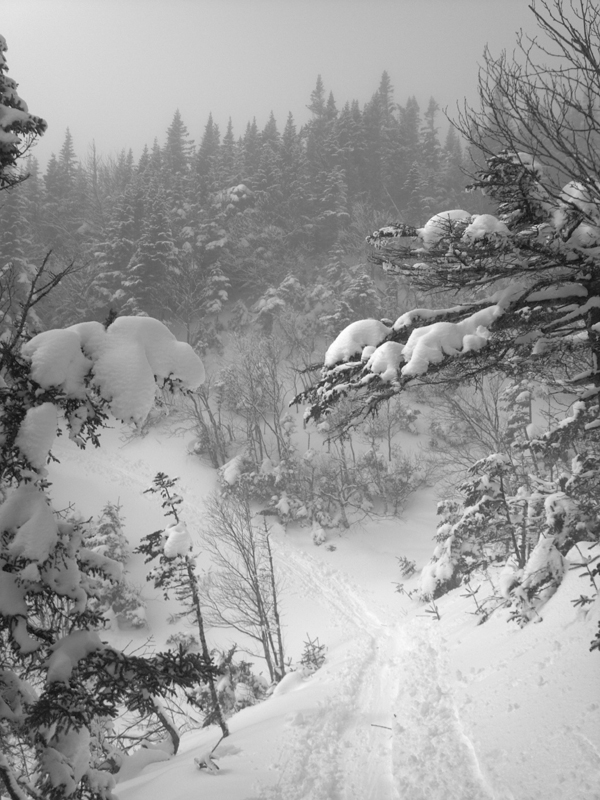 Our avy class returning from snowpack observations on the west side of Mt Washington, alongside the Cog Railway at the Waumbek Tank, 3/2: 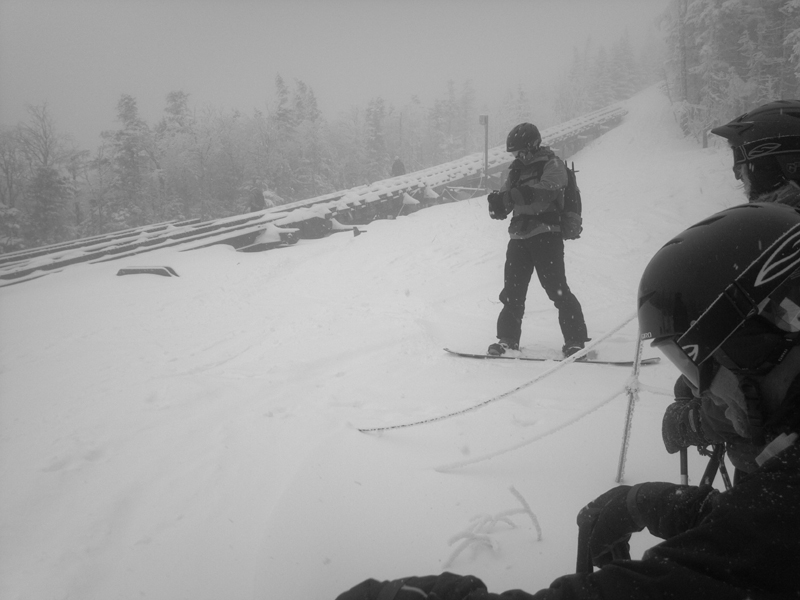 Spring corn on a Friday afternoon at a deserted Gunstock, 4/5: 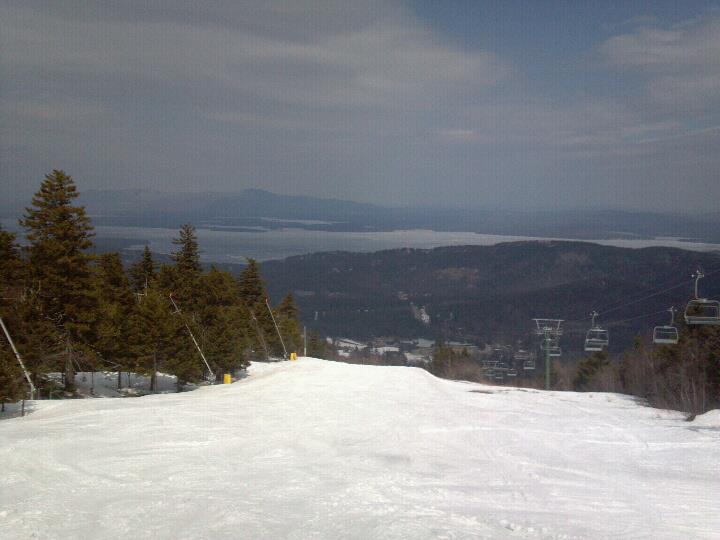 Closing day at Cannon, 4/14 - a few inches of fresh powder up top, primo corn the rest of the way, with fresh snowfall to boot: 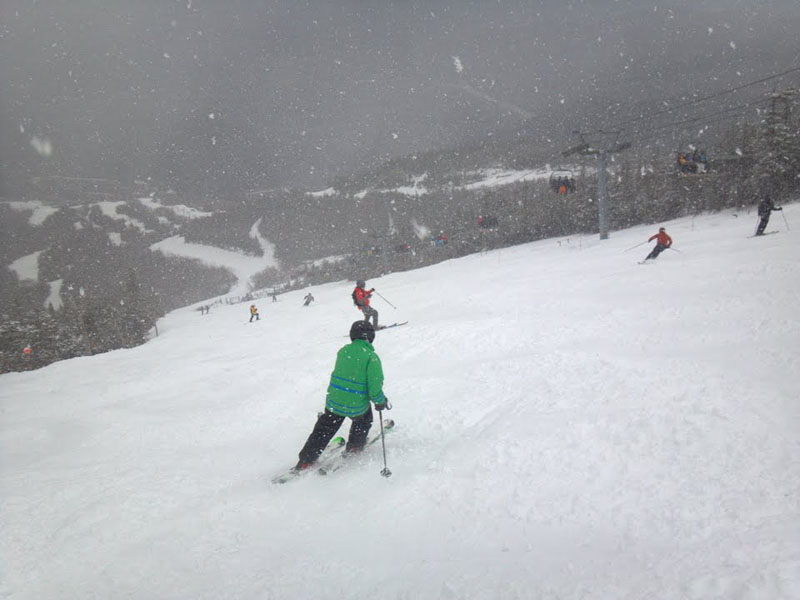 Once again, primo spring corn amid snowfall, this time up in Left Gully at Mt Washington, 4/26: 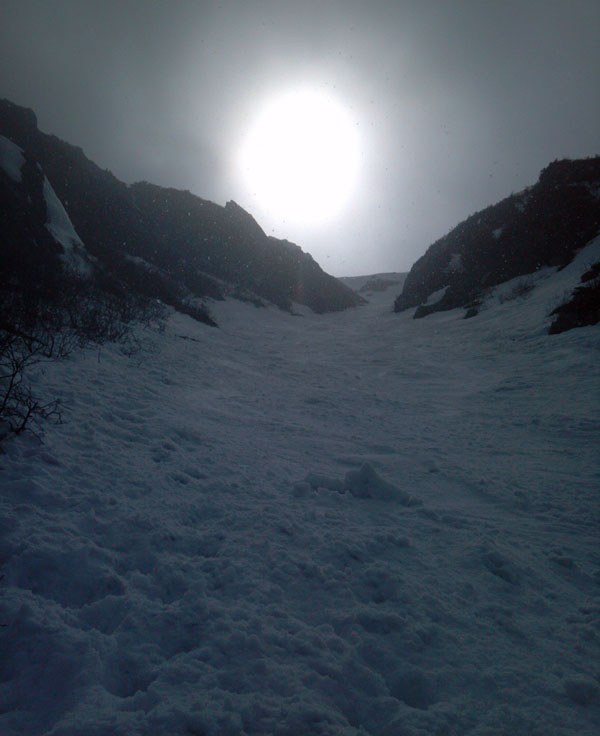 And yesterday (4/28), after we hit Hillman's Highway, this was near the end of the skiable part of the Sherburne Ski Trail on Mt Washington (with Wildcat in the background) 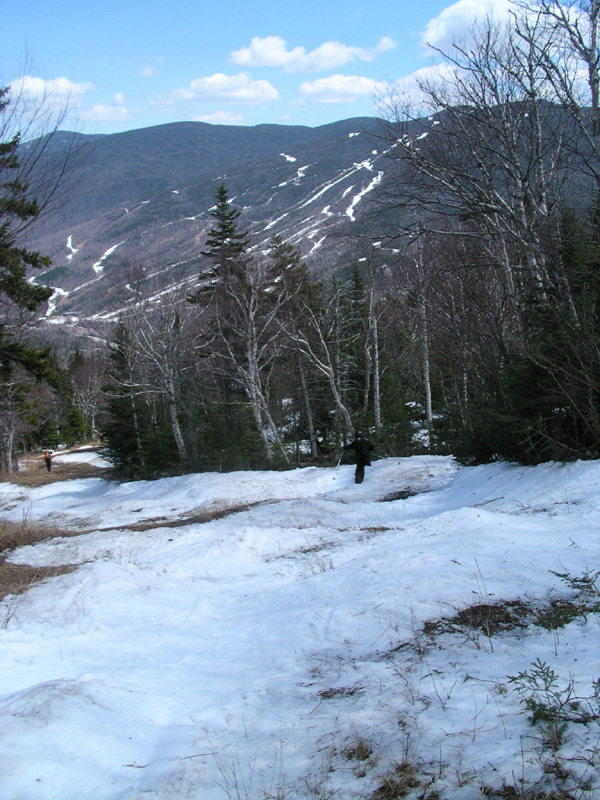 The quote function is all effed up but I want to reply to a couple points SiS17 made earlier in this thread re avalanches:

Yes, research has found that people who took avy courses were more likely to go out and get caught in avalanches. That's why in the past few years the focus of AIARE I avy courses (as noted above, I took one in March) has shifted away from a lot of snow science and much more to decision-making and human factors.

Avalanches definitely can happen in the East, albeit there's fairly limited terrain suitable for it here. Mount Washington has numerous avalanches every year (an ice climber died in one on Huntington Ravine the first day of my avy course; that certainly helped focus the mind for those of us in that class). The MTW avalanche center is the only one that does "microforecasting" of different specific areas within its purview, as to a far greater extent than out West or elsewhere, "spatial variability" is an issue at Mt Washington; I've seen in argued that digging snow pits here is a waste of time because what you find in one spot tells you little if anything about what you'll end up skiing on, and in fact can give you a false sense of confidence if you don't know better. But what it also means is that on a given day some features in avy terrain may be quite safe to ski (especially with good route-finding technique) while others nearby would be a death wish. Personally I think anyone looking to ski Mt Washington in winter should carefully read the avalanche bulletins EVERY DAY from when they start being posted, to get the best possible "feel" for the snowpack in the various forecasted areas.

There are numerous other lesser-known backcountry gullies and other features in the Whites, Greens and Adirondacks that are prone to slides. Even one area I read about in western Mass., I forget the name now, but a landslide during Hurricane Irene created a nice-looking ski gully except it is certainly prone to avalanche. The "good" thing is many of these areas are very difficult to reach and the lines are rarely "in," so chances are that people trying to ski them will have good avy awareness/decision-making skills.

Worldwide 75% of avy deaths are from asphyxiation or suffocation but on Mt Washington, which now has had 12 avy deaths, 9 were from trauma. Much less open terrain here, much greater likelihood of hitting rocks or trees.

As we have a maritime rather than intermountain or continental snowpack here in the East, depth hoar tends not to be an issue. But there still can be fairly long-lived weak layers to be wary of. On Mount Washington a late January rain crust was an issue for a time. And while yes we get thaw-freeze cycles and by springtime those do serve to consolidate the snowpack (like now), solar gain can create a weak layer if there's snowfall or wind-blown snow subsequently - that was the issue in the Huntington Ravine fatality on March 1 and another, smaller avalanche that took a skier for a small ride the same day in south-facing Lobster Claw in Tuckerman Ravine. And speaking of wind, wind slabs are a big issue during the winter on Mount Washington, not surprisingly.

Well, haven't posted here yet, but while you all wrap up the year, I went ahead and got a spring pass at Snowbird. It is so nice to just wake up, and drop over for a few runs instead of feeling obligated to get my $85 worth. Snow conditions up high are more or less fine, and I am told should be even past Memorial Day.

Fred not Lynn said:
Well, haven't posted here yet, but while you all wrap up the year, I went ahead and got a spring pass at Snowbird. It is so nice to just wake up, and drop over for a few runs instead of feeling obligated to get my $85 worth. Snow conditions up high are more or less fine, and I am told should be even past Memorial Day.
Click to expand...

If you were trying to make me jealous, you were highly successful.

If you were trying to make me jealous, you were highly successful.

Sorry about that. My humility and guilt prevented me from starting the 2013-14 thread on Nov. 8 when I should have.
You must log in or register to reply here.
Share:
Twitter Link
Top Bottom