That's one of the harder press conferences to watch without getting emotional yourself, at least among those that didn't involve somebody dying. Andy Murray is a tough sonofabitch and if it's too much for him - and you can really feel it in his words - it must be a pretty crazy amount of pain.

Meanwhile, the top 5 in the ATP Rankings go Djokovic, Nadal, Federer, The Good Zverev, and Del Potro. Same as it seemingly ever was. Murray gets #23 Bautista Agut in the first round of the Australian Open starting monday.

Murray had the unfortunate luck of playing when, arguably, three of the greatest players ever played: Federer, Nadal, and Djokovic. He was undoubtedly the next best player during this period but was fourth best by far. If we measure success by Grand Slam titles and finals, Murray is way behind:

But if we look at Grand Slam semifinals and quarterfinals, Murray is a top-10 all-time in both categories:

Since Federer won his first major -- Wimbledon in 2003 -- there have been 15.5 years of Grand Slams, so 62 majors. There have only been five majors that didn't include one of Nadal, Federer, and Djokovic in the finals. So, of Murray's 11 finals appearances, in only one major did he not face one of the big three (2016 Wimbledon against Milos Raonic).

My quick count says that, since Federer's first finals win, Roddick is next on the list behind Murray's 11 Grand Slam finals appearances with five; Stan Wawrinka has four; Marin Cilic has three; Potro, Safin, Robin Soderling, Lleyton Hewitt, Kevin Anderson have two; Thiem, Mark Philippoussis, Juan Carlos Ferrero with one. And I got bored counting and missed a few.

A friend just texted me about going to Wimbledon. This might very well be on.

hittery said:
A friend just texted me about going to Wimbledon. This might very well be on.
Click to expand...

Wimbledon this year starts the day after the Red Sox-Yankees London series. I was going to make a trip to go to both, but then Ticketmaster screwed me for baseball, and the overseas balloting for Wimbledon didn't work as I thought it did, so in the end I'm not going to either.

Yay, probably my favorite major of the year is under way, the one I can watch the most of usually as it best fits into my ridiculous overnight work habits.

Isner playing a taller and younger American, 21 year old Reilly Opelka is 7 feet even according to Wikipedia and can serve in the low 140s. Unsurprisingly the two are in a first set tiebreak.

jon abbey said:
Isner playing a taller and younger American, 21 year old Reilly Opelka is 7 feet even according to Wikipedia and can serve in the low 140s. Unsurprisingly the two are in a first set tiebreak.
Click to expand...

In the end they played four tiebreaks - Isner served for the fourth set at 5-4 but got broken and lost the match shortly thereafter. For someone reason i'm glad I missed that one.

Meanwhile, Murray won the third set against Bautista Agut and is at 5-5 in the fourth as I type - he doesn't have much more than guts and great hands at this point, but it's wildly entertaining to watch (and might be his last hurrah).

I really thought Murray would win the match after he got his nose in front at the start of the 5th...but it was almost as though he just wanted to prove he could do that, and then he gave up the ghost (while Bautista Agut got better and better). What a shame - but if that's it for Murray, what a way to go out.

Simona Halep's reward for being the #1 seed could be Venus Williams in the 3rd round and then Serena in the round of 16. No matter what, only one of those three makes the quarters.

Venus comes back from a set and 3-5 down against the #25 seed Buzărnescu, winning 6-2 going away in the 3rd, impressive fighting.

Halep's potential road is crazy, this seems unfair for a wild card, let alone the #1 seed. This could potentially be her matches starting with the third round:

Wow, plus her upcoming first round opponent Kanepi knocked her out of the US Open in the first round just a few months ago.

Those of us who aren't guarding junkyards on the swing shift like Jon Abbey might be interested in what's going to be on the telly during USA primetime hours. Recall that Melbourne is 8 hours behind us (actually, technically, 16 hours ahead), so only the beginning matches of their day are watchable by us on normal schedules - but there are a lot of them.

Right now american Denis Kudla is trying to force a 5th set against #18 Diego Schwarzman, which looks like a fun match. At 11pm ET you've got Federer, and 11:30 you have Caroline Wozniacki going against underrated swede Johanna Larsson. Sharapova graces the early morning at 5:30am on ESPN2, and Nadal plays concurrently.

Yeah, last night at like 5 AM EST they had a triple split screen between Halep/Kanepi, Djokovic, and Raonic/Krygios, then Osaka started right after.

I’m finding ESPN’s coverage innovations to be annoying. I hate the extended split screen coverage, especially since on a couple occasions they’ve run commercials on one of the screens. The weirdest thing is the court level, side angle replays using a lens that produces a fun house mirror effect that heavily distorts the visual field. Not a great idea.

Kudla barely lost in the end, 6-4 in the 5th, but a couple great second round wins from very young Americans, Tiafoe taking out #5 Anderson in 4 after dropping the first set and Taylor Fritz over a tough #30 Monfils in 4 also, the last three sets went to tiebreaks. Opelka is up a set now, very nice day for the young American men.

Opelka has 67 aces going into the 5th set tiebreak, 4th most ever in a Grand Slam, 2nd not counting Isner/Mahut.

Fabbiano is 5'8" to Opelka's 7', here is their post-match handshake. Pretty close to Spud Webb (one inch shorter than Fabbiano) against Shaq (one inch taller than Opelka), crazy. 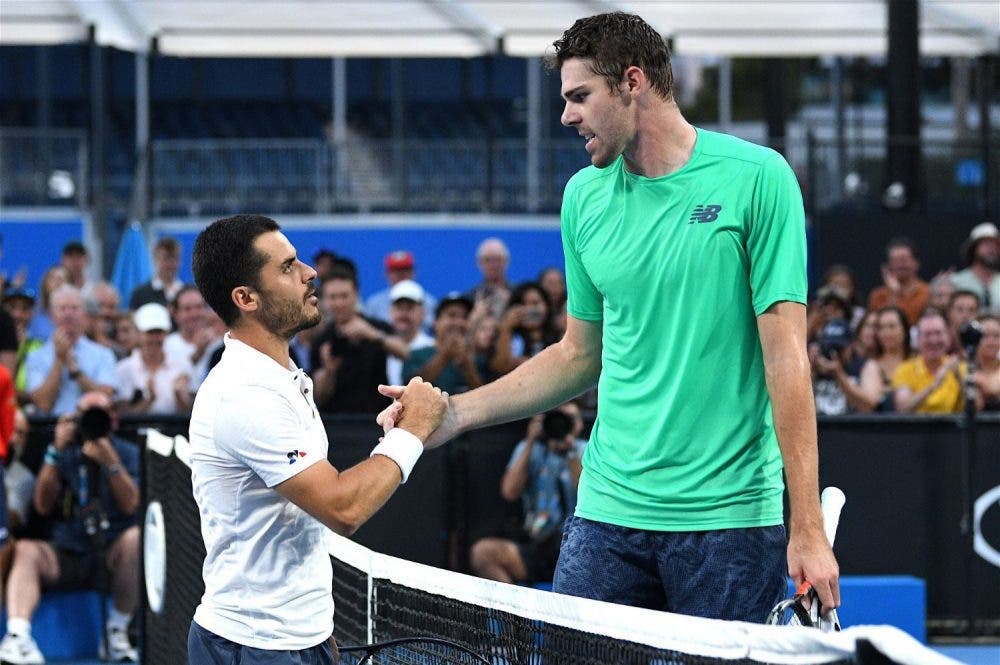 Most of the favorites are through. But in half an hour (11:30pm ET), two pretty good matchups for the early rounds: (30) Sharapova vs (3) Wozniacki, with a concurrent undercard of Sloane Stephens.

Federer is through, with some good matches to come overnight including Nadal, and Cilic-Verdasco.

Impressive win for American teen Amanda Anisimova over 11-seed Aryna Sabalenka, 3 and 2. She only faced one break point the whole match. Next up is the winner of Petra Kvitova vs. Belinda Bencic.

Anisimova is just 17, youngest American woman into a Grand Slam round of 16 since Serena in 1998.

The last American man standing, Frances Tiafoe, pulled out his match vs Seppi, winning the 4th and 5th sets. His reward is a R16 match vs Dimitrov tomorrow night.

Tonight's schedule (ET), with a lot of Americans:

3 AM EST is just their 7 PM night session. The other day everything ran way late and they didn’t finish until after 3 AM local time, 11 AM EST. Even I didn’t get anywhere near making it all the way through that before crashing.

Serena won easily (she said her first win over someone born in the 2000s), so she is waiting for the winner of Venus and Halep. This has been a very fun tournament so far, excited to see now if Shapovalov can scare Novak at all.

Good comeback for Osaka in the first match tonight, she was down a set and 4-2 to Hsieh, who was playing great. Osaka just kicked into another gear and won ten of eleven games, one match closer to a Serena rematch in the semis.

6 American women made the round of 32, 4 have won in straight sets, Keys is up 4-2 in the first and Venus/Halep later.

Venus beating an in-form world-number-1 Halep would be her best win in years, and that includes beating her sister in last year's Indian Wells.

Halep did lose five first round matches in a row coming into this and Venus has looked good so far, we’ll see soon.

The Barty/Sharapova match has been fascinating. Sharapova completely melted down, then fought back, now Barty is serving for the match.

And an ace for the win on the 3rd match point.

Tiafoe up 2 sets to 0 on Dimitrov, Kerber losing to another American. Looks like other than Animisova, a good night shaping up for the red white and blue.

Collins absolutely obliterates Kerber 6-2, 6-0. She is 25 and has never won a Grand Slam match before but she is talking shit after like you rarely see from a tennis player.

Tiafoe fights through in 4 and makes the quarters on his 21st birthday, youngest American to do that since Roddick. He gets Nadal next, good luck.

Fed takes the first set over young Tsitsipas in a 13-11 tiebreaker.

Sloane Stephens goes out too in the wee hours, ah well.

Nadal has to get through Tiafoe and the winner of Tsitsipas and Bautista Agut to make the finals, I'm rooting for a Tiafoe/Tsitsipas semi but will not hold my breath.
B

I would be curious if Federer has ever before not capitalized on a break point opportunity in his career. Credit to Tsitsipas for making it happen, but it was something to see.

Tiafoe is a joyful emotional wreck after his match:
https://deadspin.com/frances-tiafoe-breaks-down-in-tears-after-advancing-to-1831908064

We've been waiting for an American man we can believe in on the ATP Tour since Roddick. I've never been an Isner guy, Donald Young doesn't do it for me, etc. If Tiafoe can at least put the fear of God into Nadal, he'll have won me over.

Madison Keys is out now too, Osaka down a set also. The women's tournament has gotten wild in the last few days, one of these four will be in the finals:

Have to think the Kvitova/Barty winner has the advantage there but who knows at this point.

Zverev with his reliable "how is this guy the #4 seed?" performance, stomped by #16 Raonic, 6-1, 6-1, 7-6. Zverev seems to always be seeded number 4 recently, but he has only ever made one Grand Slam quarter even.

Those who may have a liiiiiiiittle bit of adrenaline in their system after the football games tonight may find that a good way to spend some time if they can't sleep.

The top half of the women's draw is still completely loaded, there are six women left:

Four of the top seven seeds (1, 4, 6, 7).
Maybe the greatest player of all time (I still go Martina but we will see once Serena finally stops.
And maybe the 'worst' of the six, former #1 and multiple Grand Slam champion Muguruza.

The bottom half I listed above, Kvitova is the favorite there but the two halves couldn't be more lopsided.

With Zverev, should it be expected for him to take a while to figure out how to harness his considerable talents consistently? Or do his struggles in the majors portend continuing issues with winning in the big tournaments?

Mr. Wednesday said:
With Zverev, should it be expected for him to take a while to figure out how to harness his considerable talents consistently? Or do his struggles in the majors portend continuing issues with winning in the big tournaments?
Click to expand...

Here’s a recent opinion from Mark Philippoussis, he thinks his style doesn’t translate well to repeated best of 5 matches:

Holland on the Plains

Woke up at 2:00 am to catch Serena v. Halep. It was a very well-played match, though neither was getting in her first serve consistently. Happy that Serena won.
You must log in or register to reply here.
Share:
Twitter Reddit Pinterest Tumblr WhatsApp Email Link
Top Bottom