Game 2 at Tampa - Seek and Destroy

A broken goalie skate and a disallowed goal couldn't stop the Bruins from riding the lightning to a convincing win. And what, what is this? Rick Nash scoring playoff goals?? Wait I was told he couldn't score in the playoffs. So now the second line is scoring? I mean that's not fair. It's one thing when the greatest line in the NHL is toying with you but now the second line? I was worried about SOSH nancying but maybe it's time for Tampa fans to start nancying. Speaking of Tampa,

Make the Bolts feel the pain.

Keep the pressure on. WIN.

All three other series are tied 1-1 - lets be different and be the one series that is 2-0 after tonight....

Win this so that Justice is done. 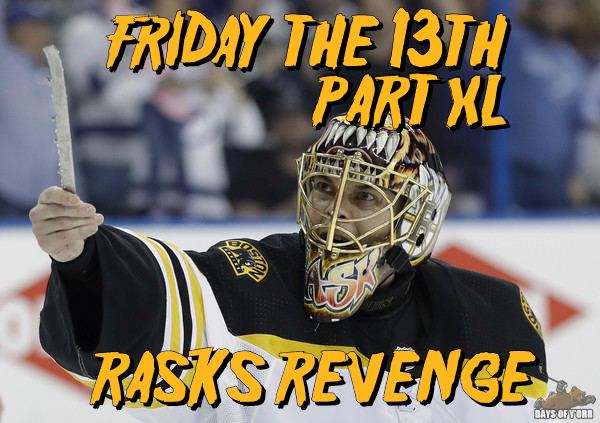 Rip their heads off.

The more I think about this, the more I realize he could have killed somebody. Let that thing go early and it’s flying into the crowd and who knows then.

I'm honestly surprised Rask hasn't been fined for that. Although, this is hockey and much crazier shit has happened. If that was the NFL, people would be calling for a suspension, but it's the NHL and it doesn't seem that crazy.

Ed Hillel said:
The more I think about this, the more I realize he could have killed somebody. Let that thing go early and it’s flying into the crowd and who knows then.

Let's not get crazy. It's not like he was risking a guy's life by licking them.

Manhattan by day, Stratford by night/weekend

That's how they started, but they flipped Kuraly and Riley Nash around the beginning of the 3rd period, didn't they?

EDIT: Saints Rest beat me to it. They did switch the two up mid-game. So I guess it's back to the lineups they started with? Kind of curious, no?

Not necessarily. Cassidy thought it was needed based on the flow of the game. In an ideal world, Riley Nash is better suited for the third line.

NYCSox said:
Not necessarily. Cassidy thought it was needed based on the flow of the game. In an ideal world, Riley Nash is better suited for the third line.
Click to expand...

Perhaps, but the switch sure seemed to work in game 1.

Win tonight and get a stranglehold on the series. TB is too good to give them any type of room to breathe. Don't be content with 1-1.

RSN Diaspora said:
Perhaps, but the switch sure seemed to work in game 1.
Click to expand...

The 3rd line couldn't get the puck out of the zone early in the game, and I think Kuraly is better at that than Nash, even if he's not as good of an overall player.

In general, I think one of their standard zone exit plans—the pass along the boards to a forward for the little kick pass toward a teammate skating up the middle—has been stymied a bit in both series by a more aggressive forecheck, which is an inevitability in pretty much any playoff series.

Probably why we've seen a lot of icings as they try to stretch things out more and limit the number of passes inside the defensive zone. When the D-men have their skating game rolling, things have been a lot easier in that regard. Always fun to think back on past editions of the Bruins who could barely get out of the zone with fewer than a dozen D to D passes per shift.

NYCSox said:
Rick Nash scoring playoff goals?? Wait I was told he couldn't score in the playoffs.
Click to expand...

I remember hearing the same thing about Marchand at the start of the playoffs. I fully expect both Rick Nash and Marchand to put points on the board again tonight. Win!!!

really could use a nice and easy Bruins win tonight, say 5-0 or something like that. K? Thx. Bye!

Manhattan by day, Stratford by night/weekend

I wonder if an early goal could take the crowd out of the game. Ian Moran on BCS noted the lack of home crowd on Saturday: “I have no clue what that rink is called (Editor’s note: Amalie Arena, Mr. Hockey

) but it was quiet. During the regular season, it’s pretty common to hear the guys on the ice communicating while the play is going on and Saturday it sounded like a Tuesday in January. It was dead. I don’t think the crowd causes wins and losses but I do think they can taunt Tuukka or Marchand. Make the Bruins think about something else for a split second, and you never know if a blunder can happen.”

I see NBC used the same footage of fans outside the arena that they did for game 1.

Salem's Lot said:
I see NBC used the same footage of fans outside the arena that they did for game 1.
Click to expand...

You ratted them out. Just used the Marchand clip again too.

Man, using Imagine Dragons for your skate-out sing sure is...well, it’s something.

Let’s be consistent out there Refs. It’s all we ask. I know it’s a lot to ask, but it’s why you’re a professional ref and not in some beer league. Though the way some games have been called this offseason some of you might need to go back to that level.

Damn. If that hadn’t handcuffed Bergeron, he was ready to rip it home.

The Napkin said:
Tuukka came to play...
Click to expand...

Nah it's the playoffs, he never shows up

Jake with the wheels

Watching them play Tampa I really appreciate how fast Toronto really is. The Lightning aren't a slow team, but you can tell the speed difference between them and Toronto.

Krejci is a nightmare in his own end.

That was a circus save there.

They better wake the fuck up

Tuukka’s gonna need to stand on his head if they keep turning the puck over like this.

Bergeron with the rare screwup in that clear.

Jeebus this is horrible.

Tuukka is the only one awake so far

Uh Quaider did well at first then TOTALLY undid all the good. Grz not off to a good start this period.

how the fuck are we short handed?