I voted for Bonds, Clemens, Jeter, Manny, Schilling, and would have voted for Rolen as well.

Walker just doesn't get there for me, given what other corner OFers were doing offensively during his era, plus where he did most of his damage, on top of durability issues hurting his counting stats. Rolen gets there for the level of defense that he played at his position for years.

I'm actually not a big HOF guy, I'd happily throw out a bunch of guys already in there (Rice, Morris, Dawson, BAINES, and so on), but I think the HOF exists to tell the story of baseball through the years. I don't think you're telling the story of the best/most famous players of that era without Bonds, Clemens, Jeter, Manny, or even Schilling, and I think Rolen just barely merits inclusion.

JMDurron said:
Walker just doesn't get there for me, given what other corner OFers were doing offensively during his era, plus where he did most of his damage, on top of durability issues hurting his counting stats. Rolen gets there for the level of defense that he played at his position for years.
Click to expand...

I'm getting there on Walker, not sure if I'm there yet.

On the other hand:
- 141 OPS+ overall, which is era-adjusted
- Won an MVP, got votes 7 other years.
- 72.7 WAR would be among the highest among eligible players NOT in the hall. Bonds, Clemens, Schilling at 79.5 and Lou Whitaker at 75.1 (plus two 19th-century guys) are the only ones ahead of him.
- anchored the Colorado Rockies' lineup for basically all of their first decade of existence, making him their first real star and then co-stars with Helton. He was the only thing worth watching as baseball tried to colonize Denver.
- Mashed in the 2004 postseason for St Louis in his only real chance to play in October; they never make the WS without him. He even had a 1.366 OPS against the Sox.
- I dunno about durability. He missed a few games. But he also played >125 games in 11 of his 16 seasons as a starter, and never below 82.

I don't think you have to be an Enormous Hall guy to vote for him. You just have to accept that he'd have been slightly less extraordinary if he'd played for another team. Except: he didn't. In the real world, he mashed, and he was part of the tale of baseball for the 90s and 00s.

The wrong side of the bridge....

I voted for Jeter and no one else, which makes me feel like I should be handing in my membership card to something or other.

Looking at Jeter again, I'm surprised at how non-open-and-shut his case is. He never won an MVP award, and finished in the top 5 only three times, even though he played at a marquee position for seven World Series teams. He had middling power, with an ISO topping .200 just once and .150 just four times in perhaps the most power-happy era in the game's history. He was regarded as an elite tablesetter, yet during his prime decade, 1998-2007, he ranked 19th in OBP and 27th in wRC+ out of 203 guys with 3000 PA or more. I'll leave his defense aside except to say that I don't think it's a plus. With the usual WAR caveats, he had less brWAR per PA than Bobby Abreu or Buddy Bell. I voted for him, and I do think he's a Hall guy, but the case for him as a slam-dunk, first-ballot Hall guy just isn't that strong.

As for Schilling, even before all the personal negatives came into the picture, I've never been able to see him as Hall material. I admit you can make a pretty strong case with the numbers against that view, but I tend to think of him as borderline even just as a player, so the personal stuff makes it easy to put him on the wrong side of that border. I won't call it a mistake if he does get in, but I can't vote for him.

Manny and Walker are both on the cusp for me. I'm more inclined to say yes for Manny and no for Walker, even though they were arguably players of comparable quality (though very different skill sets). But I couldn't quite pull the trigger on either.

My preferred scenario for Bonds and Clemens is that they don't make it in at this stage, but end up getting voted in by the VC or some other side door years from now.

Everybody else in the poll seems easy to say no to. Helton, Kent and Wagner are quintessential HoVG, and Vizquel is more like Hall of Very Long, or maybe Hall of One-Trick Ponies. He was a great shortstop, but only a good baseball player.

Did something change about playing in Denver in the last few decades, because I thought the recent research suggests it’s not that much of a hitter’s haven?

Marciano490 said:
Did something change about playing in Denver in the last few decades, because I thought the recent research suggests it’s not that much of a hitter’s haven?
Click to expand...

No, it is still the easiest park to put up numbers in, but what the recent research has shown is that Rockies hitters' road numbers are pushed down (since they are constantly adapting back and forth between less and more movement on the same pitches) at least as much as the home ones are pumped up. The main stat that takes this into account now is DRC+, not surprisingly they love Arenado (best non-Trout player in MLB) and LeMahieu before NY signed him. 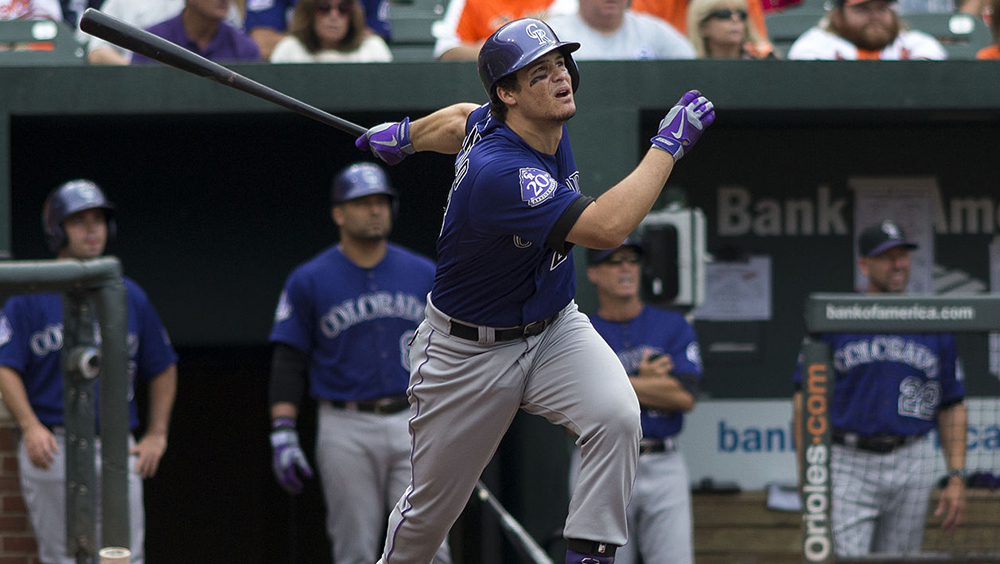 The Epistemology of Hitting; or, What Constitutes a Fact about Nolan Arenado?

As we pursue truth, are we striving too much for certainty?

Chris Iannetta is the best single player to demonstrate this as he has jumped around including two COL stints since 2008, I just posted this in the NY thread since they signed him to a minor league deal, but you can clearly see a career-long trend here. 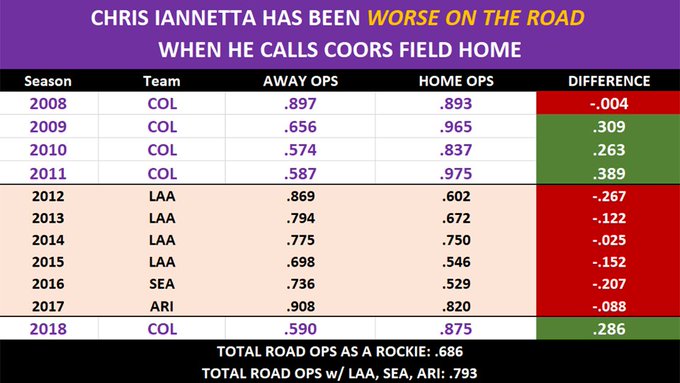